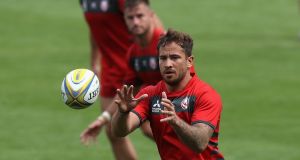 Cipriani has been fined £2,000 by Jersey Magistrates’ Court after pleading guilty to charges of common assault and resisting arrest following an incident in a nightclub on the island.

“Danny is a Gloucester player and will receive our full support as we focus on the exciting season ahead,” said Vaughan.

A female police officer suffered bruising to her neck in the incident at the Royal Yacht Hotel in St Helier on Wednesday, the court was told.

Cipriani, who won his 16th cap for England on their June tour to South Africa, was fined £1,500 for resisting arrest and £500 for assault. He was also ordered to pay £250 compensation to the police officer.

The Rugby Football Union has declined to comment on the latest lapse in a poor disciplinary record that includes previous court appearances for drink driving and affray, but Gloucester are standing by the player they signed from Wasps during the summer.

“We are very proud of the culture we have within the group and the stated values which we strive to deliver against,” the Gallagher Premiership club’s statement read.

“Incidents of this nature are very disappointing to be associated with, and we will deal with it in a robust but balanced way but based purely on the facts.

“As a high-profile sportsperson there is often a large degree of public and media scrutiny involved, which Danny is well aware of.

“The incident in question was over in a matter of seconds and was a reaction to the conduct of other parties involved.

“He knows his responsibilities and is aware of the impact of this type of incident on the club.”