Paddy Jackson determined to build a new life in Perpignan 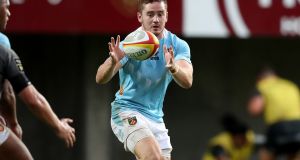 Paddy Jackson in action for Perpignan during the pre-season friendly against Toulouse. Photograph: Billy Stickland/Inpho

Paddy Jackson said people might not be able to understand what he has been through unless they experienced something similar but he is determined to push on with his life on and off the rugby pitch.

Jackson has moved to the south of France after securing a two-year contract with Top 14 side Perpignan and he made an impressive debut for the Catalan club last Thursday against Toulouse in a pre-season friendly in what was his first appearance since he and former Ireland and Ulster team-mate Stuart Olding were suspended pending their trial over the alleged rape of a student in Belfast. The pair were found not guilty at Belfast Crown Court. Jackson was also found not guilty of sexual assault.

Jackson is the star summer signing for Perpignan, who were relegated for the first time in their 116-year history four seasons ago and who have recently been promoted back to the top flight.

Olding has signed for another French side, Brive, and has impressed in pre-season friendlies, while Jackson is also determined to rebuild his career. But he admitted it has not been easy.

“I have come out somewhere where people know about it but they are all respectful and understanding about it. They have helped me in training to get into the lifestyle here. I have just been focusing on playing here,” said the 26-year -old.

Jackson, who made his Irish debut against Scotland in 2013 and who won his 25th cap in Japan last summer, said he is putting a lot of effort in learning to speak French.

“The language has been the most difficult thing. I have a very small bit of French from school, which is not very good at all. I have been getting lessons twice a week and just trying to stay on top of it. At the minute it’s not clicking in speaking but I can start to understand reading and stuff like that.”

And yet he was quite vociferous running his backline against Toulouse on Thursday night but Jackson said that was down to him learning key rugby phrases.

“It’s different on the rugby pitch because you have your calls and I know what a call means. Rugby is almost a language in itself. I have struggled with the language.

“But once I got out on the pitch today I felt like I just came out of my shell again. I was just back playing rugby which is all I wanted to do.”

Perpignan, who won the last of their seven Top 14 crowns in 2009, have one of the smallest budgets in the league even though it is over €16m, and Jackson knows there is serious pressure on them to avoid relegation.

“There is a lot of pressure. The other two 10s are here. They have been brilliant in training as well. We have all been pushing each other. I just want to fit into the team and do the best I can. Pressure comes with any team, any ten has pressure on them. I am just enjoying being back playing.”

There are more Irish players in the Top 14 this season that at any other time and on Thursday night he will play against former Irish team-mates Simon Zebo and Donnacha Ryan when Racing 92 come down from Paris to take on Perpignan in a pre-season friendly.

And Jackson has been bumping into many of the hundreds of Irish tourists who visit the Mediterranean resorts near Perpignan, which is close to the Spanish border.

“There are definitely a lot more Irish players out here now. And there is a lot of people here on holidays from all over Ireland. I have been bumping into them non-stop down at the beach. It’s really nice hearing a familiar accent.”

He’s aware of the comments of IRFU performance director David Nucifora – ironically made on the day Jackson arrived in France – who suggested in June that the door might not be closed on Olding and him returning to play in Ireland.

“I saw the comments but I just take everything as it comes now. There is no point getting too worked up over anything. I am just loving being here and trying to just fit in as much as I can. I am just glad to be back playing.

“I have somewhere where I have friends and family coming over to visit. It’s a lovely climate. Everything for me, it’s about enjoying where I am. It’s just all been about rugby and getting back enjoying life. That is all I have been thinking about really,” he added.