‘What I want to do is take Connacht to the next level, get in the team, start every week’ 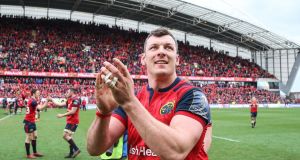 Robin Copeland is readying himself for his maiden season in Galway after leaving Munster for Connacht. Photograph: Gary Carr/Inpho

One’s a naturally gifted number eight from Wexford who went from Kilkenny College to St Mary’s in the AIL – never truly registering in Leinster – before a journeyman career through English lower leagues led to a powerful stint at Cardiff, which was rewarded with a Munster contract that flattered to deceive (confirmation of the move to Galway sparked his best form in a red jersey).

Muldoon was a home province man, an honest to God blindside and natural leader of men after growing from the deepest hurling roots. The Portumna native is away to Bristol to earn coaching stripes under Pat Lam as Copeland seeks to become a permanent name on new Connacht coach Andy Friend’s team sheet.

“I personally have a great relationship with [Friend] so far and hope that continues,” said Copeland at the eir sport Pro 14 launch. “There has been certain coaches where I haven’t had great relationships but that’s sport.”

This inevitably brought Joe Schmidt to the surface (like any apex predator the Ireland coach remains close but yet out of sight). Schmidt capped Copeland against Georgia in November 2014, gifting him 19 minutes off the bench.

That was enough, but what happens if Jack Conan or CJ Stander are laid low and Copeland finally lives up to all that potential?

“It’s not even on my radar to be honest. If you think Joe Schmidt is going to blood in a 30, 31-year-old for a World Cup or anything like that. . .I’m not on his radar. I’m not even going to think about that because that’s not my goal, what I want to do is take Connacht to the next level, get in the team, start week in week out, prove myself to my peers and the fans, show them that this guy is here and is going to be great for them. When the chips are down he is going to get us where we need to get to. That’s all I’m looking at.”

Copeland needs to shake off a hip flexor injury before any ambition is realised.

“If anything else happens after that, I’m always friendly to Joe, he is a very nice guy,” Copeland could have left it there but unprompted he added: “He is an interesting, intense individual. He has a big plan and I’m not naive to what he is trying to achieve, his long term goals, it’s there in front of everyone, everyone can see it.

“He brings in young guys and brings in guys consistently because he has a game plan and a system. A player on form is not necessarily what he looks at and it works, you can’t deny his plan works so, no, it’s not on my radar, it is not one of my goals because I have so many goals before that I need to tick off.

One of Schmidt’s many gifts is the ability to keep almost every player, even those based abroad, clinging on to the hope of selection, with occasional interactions designed to motivate. Copeland’s career Achilles heal has been consistency.

“More the mental side. Cutting out errors would be a lot of it. I don’t know, haven’t spoke to him in a little while.”

Again, he could have left it there.

“I did a bit of hosting for the players awards at the end of the season. Just some Q and As, light banter between people. He came up to me and I was waiting for him to say, ‘Well done’ but he said, ‘Maybe get somebody else to do it next year’ so that says a lot about mine and Joe’s relationship. I was like, ‘Thanks coach, you are doing a great job.’”

“I know I am not on his radar at the moment. If things change. . .the speech was very much off the cuff and it seemed that way. I understand why he said what he said.”