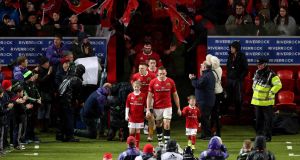 The Ireland backrow last captained the province when they beat the Maori All Blacks in November 2016.

He is joined in the backrow by Dave O’Callaghan and Gavin Coombes, with Fineen Wycherley and Darren O’Shea in the engine room. Ahead of them, Jeremy Loughman, Kevin O’Byrne and Brian Scott make up the frontrow.

Behind the pack JJ Hanrahan will pull the strings from outhalf, with James Hart at number nine.

Rory Scannell and Dan Goggin line up in midfield, with Calvin Nash and Darren Sweetnam either side of fullback Stephen Fitzgerald.

Cronan Gleeson, Jack Daly, Alex McHenry, Liam Coombes and Mike Haley are set to make their first senior appearances for the province from the bench.