Read and Retallick return to All Blacks XV for Wallabies opener 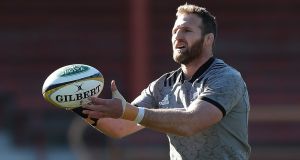 All Blacks captain Kieran Read and lock Brodie Retallick have returned to the side for their Rugby Championship clash with Australia in Sydney on Saturday in what will be Sam Whitelock’s 100th Test for the world champions.

Read has not played for the national side since last November due to back surgery, while Retallick has not appeared in an All Blacks shirt since last year’s Rugby Championship.

Retallick missed the end-of-season tour last year for personal reasons then suffered a broken bone in his chest and did not appear in the June series against France.

Whitelock, who captained the side in the June series, is the eighth player to attain 100 caps for the All Blacks.

“We want to congratulate Sammy on what will be a very special night for him and his family,” coach Steve Hansen said in a statement. “We’re all very proud of him.

“He’s been an outstanding contributor to this team for a long time, both on and off the field. To play one test for the All Blacks is an achievement in itself, but to be good enough to be selected and play 100 tests is a remarkable feat.”

Centre Jack Goodhue will also play his second test in partnership with Canterbury Crusaders team mate Ryan Crotty, who slots back into his preferred inside centre role to fill the hole left by the injured Sonny Bill Williams.

Beauden Barrett has also been named to start at flyhalf, with Damian McKenzie coming off the bench to cover the pivotal position while Richie Mo’unga has missed the matchday squad.

Mo’unga’s possible selection had been the subject of debate in New Zealand after he helped the Crusaders to their ninth Super Rugby title and outplayed Barrett and Springboks flyhalf Elton Jantjies on successive weeks.

Hansen has also rewarded winger Waisake Naholo for his strong form in Super Rugby and opted not to give Jordie Barrett another opportunity at fullback with Ben Smith given the number 15 jersey.

Hodge, who spent much of the season at outhalf for the Melbourne Rebels, has played virtually every other backline position for Australia and steps in for the injured Samu Kerevi and Tevita Kuridrani.

Wallabies coach Michael Cheika also recalled hooker Tatafu Polota-Nau and utility- back Matt Toomua to the side. Both have been playing club rugby in England, with Toomua returning home next season to link with the Rebels.

Cheika was also able to include captain Michael Hooper and wing Dane Haylett-Petty to the starting side after both recovered from long-term injuries.

Hooper had been battling a hamstring injury he sustained in the 2-1 series loss to Ireland in June and will link up again with David Pocock in the loose forwards trio.

To offset the relatively small Hooper and Pocock duo, Cheika has added the hulking Lukhan Tui, who can also play lock, to the side of the scrum as blindside flanker.

Outside back Jack Maddocks is the only uncapped player in the 23-man squad and could make his test debut from the bench.

The Wallabies won their last meeting with the All Blacks 23-18 in Brisbane last year.