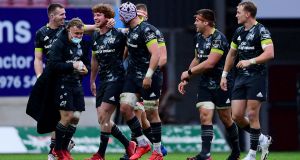 A last gasp Ben Healy penalty saw Munster overturn a 14-point deficit and a red card for captain Peter O’Mahony to beat the Scarlets in Llanelli on Saturday.

The Irish province were outthought and outmuscled for most of the game, but showed tremendous resilience to snatch victory from the jaws of defeat in their first Guinness Pro14 clash.

Tries from Jack O’Donoghue, Chris Farrell and Kevin O’Byrne were enough to give them an opening weekend win.

In front of the watching British & Irish Lions head coach Warren Gatland, O’Mahony did himself no favours as he was sent off for accumulating two yellow cards over the course of the game.

Munster played with plenty of intent in the first 40 minutes which was dictated by blustery conditions in west Wales. Johann van Graan’s side typically tried to control the Scarlets physically with powerful carries from the likes of CJ Stander and Jean Kleyn while their scrum was in the ascendancy in what was a lively first half.

But Munster were susceptible to the Scarlets’ jacklers at the breakdown with openside flanker Josh Macleod in particular a thorn in their side. In a bruising opening quarter Leigh Halfpenny kicked the hosts into an early nine-point lead before Munster hit back with a well-taken try.

Munster blindside O’Mahony was sent to the sin bin for a reckless off-the-ball tackle after needlessly charging into a ruck.

After building some pressure in the Scarlets 22, the ball was turned over by Ken Owens and booted down field. But it was regathered by Craig Casey who sent Damian de Allende galloping down the touchline to put O’Donoghue over with JJ Hanrahan converting.

The Scarlets pack turned the tables on the Munster eight after the interval as they sucked the life out of their opponents with their driving lineout and dynamic forwards led by impressive Scotland international Blade Thomson doing some serious damage.

This forward dominance allowed Halfpenny to kick a further two penalties to give the west Walians a 14-point cushion going into the final quarter.

Munster’s game went to the dogs as they were knocked backwards at most collisions while the Scarlets scrum, transformed from the first-half, shoved Munster backwards at a rate of knots.

Halfpenny kicked the hosts even further ahead after a searing brake by Wales wing Steffan Evans who linked up well with Macleod. Fineen Wicherley was penalised for going in at the side of the ruck to allow Wales’ marksman to push Munster further behind.

Munster hit back with what appeared to be a well-worked try as Ireland centre Chris Farrell powered his way over from short range. Despite awarding the try, referee Sam Grove-White referred the decision to the television match official who informed him O’Mahony had charged into another ruck with his shoulder. O’Mahony was subsequently sent off after receiving another yellow card, but the try stood with Healy converting.

Due to O’Mahony’s rush of blood to the head the Scarlets were also awarded a penalty on halfway which Halfpenny predictably kicked to break the home side’s record for most penalties in a game (eight). It saw him overtake the previous record of Wales coaches Stephen Jones and Byron Hayward, but it was still not enough for victory as O’Byrne crossed in late drama and there was still time for Healy to get Munster out of jail.

Replacements: K O’Byrne for Marshall (45 mins), F Wycherley for Kleyn, J Loughman for Cronin, B Healy for Hanrahan (all 52), R Scannell for Sweetnam, S Archer for Ryan, G Coombes for O’Donoghue (all 62), N Cronin for Casey (73).