Quarantine measures would see players have to isolate over Christmas 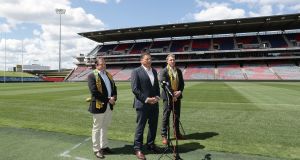 New Zealand Rugby has broken ranks with its southern hemisphere partners and demanded a change to the Rugby Championship schedule in Australia, complaining that the All Blacks will be forced to spend Christmas in quarantine upon arriving home.

The All Blacks play their final match of the six-week tournament against Australia in Sydney on December 12th and would need to isolate for two weeks on their return to New Zealand as part of Covid-19 protocols.

Minutes after governing body Sanzaar released the schedule on Thursday, New Zealand Rugby (NZR) issued a statement condemning it and suggested “commercial considerations” had trumped the wellbeing of its people.

NZR chief executive Mark Robinson said his federation had planned for the All Blacks’ last match to be December 5th to give the team time to join their families for Christmas.

“We haven’t agreed to this schedule and are disappointed at the announcement,” he said.

With the Covid-19 pandemic limiting international travel, Australia was awarded sole hosting rights two weeks ago in a major disappointment for New Zealand, which Sanzaar nominated as the tournament’s preferred host mid-year.

Sanzaar, a joint venture between Australia, New Zealand, South Africa and Argentina, stood by the schedule and said there had never been any agreement for it to finish a week earlier.

Sanzaar chief executive Andy Marinos told state broadcaster TVNZ that Australia had made a similar request for a five-week tournament when New Zealand was preferred host.

“It was flatly denied [by NZR] and [Australia were] told ‘tough luck’,” he said. “There’s a lovely saying, don’t let facts get in the way of a good story.”

Rugby Australia said it had supported a proposal for a five-week tournament on two “formal occasions” but it was rejected both times.

“That being said, no one wants players and team management to be away from their families and in quarantine over Christmas,” Rugby Australia interim chief executive Rob Clarke said in a statement.

“Rugby Australia will do everything in its power to help assist New Zealand Rugby and the team in finding a reasonable resolution.”

South African Rugby said the Springboks’ participation remained conditional on the South African government lifting its ban on international sporting competition and “the outcome of assessments of high performance and player welfare issues”.

Marinos said the tournament was already “pretty arduous” as it was without condensing it further.

“We’ve got to be cognisant of player welfare but there’s also player safety,” he said.

The tournament, featuring six rounds of double-headers, kicks off with world champions South Africa playing Argentina and the Wallabies playing the All Blacks at Brisbane’s Lang Park on November 7th.

The fourth round will be held in the port city of Newcastle, with the other rounds in Sydney.

In recent months, NZR has been at loggerheads with Sanzaar partners, especially Australia, over the future of Super Rugby, but Robinson said his federation remained “firmly committed” to the joint venture.

John Cooney called into Ireland squad for France clash 10:58
All in the Game: Klopp’s Amsterdam subs don’t go down well 10:00
The Offload: Outgoing Tom Grace will be missed by IRFU 10:00
Madness or defiance? The GAA is taking a huge gamble in staging Championships 06:00
Limerick’s warning loud and clear despite the eerie silence in Thurles 06:00
Crossword Get access to over 6,000 interactive crosswords