Munster and Scarlets will give Pro12 the finale it deserves

Decider may not pack Aviva to the rafters, but it will bring two in-form teams together 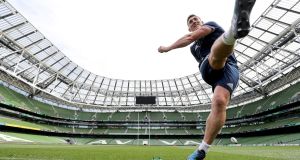 On TV: Live on Sky Sports, TG4 and BBC Wales.

The 2017 Guinness Pro12 final may not be the finale which would have packed the Aviva to the rafters and ensured the greatest sense of occasion, but in many respects it is the finale it deserves.

Today’s season-defining decider brings together the competition’s two in-form teams. Each has momentum and a settled team. Munster have won seven league games on the bounce, the Scarlets six, and Rassie Erasmus and Wayne Pivac have announced unchanged match-day 23s from their semi-finals wins over the Ospreys and Leinster.

While not always scaling the heights they showed in, say, consuming Glasgow last October or athletically dissecting Racing 92 in Paris in January, Munster have continued to do their thing, albeit they will need to up their game today.

The only blemish is that the glorious first blast of summer isn’t lasting another day or two. The forecast morning and early afternoon storms are set to abate before kick-off, but could return in the second half. Hopefully not.

Thus, despite the presence of Nigel Owens, it may not be that high-scoring an affair, but it may be no less compelling for all that. But if the game’s fluidity is affected by the conditions, it certainly won’t dilute the intensity in any way. First and foremost, Munster will again be seeking to honour the memory of Anthony Foley. One always felt their ideal means of doing this was by winning a trophy.

In this, they are also seeking to atone for their beating at the hands of Glasgow in the final in Belfast two years ago and thus win their first trophy since beating Leinster in the final at Thomond Park in 2011. For their part, the Scarlets are looking to win their first Championship title since 2004.

Hence, no less than Munster, the Scarlets have every motivation in the world. Having become the first side in 19 attempts to win a semi-final on the road, they now have the chance to complete a famous knock-out double on Irish soil against the two heavy-hitters. What’s more, having lost their first three league games of the season, beginning with a defeat at home to Munster, they arrive at the Aviva on the back of 18 wins out of their last 20 Pro12 games.

Admittedly, Munster’s only defeat in their last 17 Championship games was their 21-30 loss at home to Scarlets in round 16 when they let slip a commanding half-time lead with an unusually porous and disconnected defensive display.

Furthermore, Donnacha Ryan will win his 167th and final Munster cap, with outside centre Francis Saili and replacement Jean Deysel also moving on, while Conor Murray will make his 100th Munster appearance, thus becoming the 10th player of the current squad to reach the milestone. Coincidentally, his opposite number, Gareth Davies, will make his 150th appearance for the region.

The Scarlets, under-rated 5/1 outsiders against Leinster, remain 3/1 underdogs today, which hardly tallies with the formguide, not least with the Ospreys as recent formline. There’s something about a cocky Welsh side in form. It goes with their traditional footballing abilities. Although their tight five remains underpowered by the absence of Ken Owens and Jake Ball, their set-piece stood up well in the RDS. They have a wonderfully balanced back-row in the athletic and rangy Aaron Shingler, an openside of all the talents and some more in James Davies, and the skill set of John Barclay.

And then there’s their back-line, centred around a supreme centre pairing. Scott Williams’s ability to straighten the line and Jonathan Davies’s nous, not to mention his defensive reads, did much to both open up and shut down Leinster.

Munster have the best defence in the competition, and once again it was the bedrock of their semi-final win over the Ospreys, but it will be tested on an altogether different level by the Scarlets’ wonderfully straight lines of running, support play, offloading and ability to attack inside and outside shoulders.

One ventures that Munster will need to maintain possession, keep resourcing and recycling at ruck time, and to that end mostly set close targets, while kicking to the corners and utilising their maul.

Watching on a tad anxiously will be Warren Gatland and the Lions’ coaching staff, given all of Munster’s trio of would-be tourists – Peter O’Mahony, Murray and CJ Stander – will be starting, as will the Scarlets’ Jonathan Davies and Liam Williams, whereas Ken Owens is again sidelined. Not that the Lions will be a distraction for O’Mahony.

“Look, it’s easy because I want to do well for the club and I haven’t won anything with this club,” explained the Munster captain with his customary straightness. “It means a huge amount to me. So, it’s easy. I’ve been selfish that way, I’m firmly in Munster camp at the moment.

“For the last five or so weeks since it [the Lions squad] was announced, there’s been lots of guys who’ve been named in touring squads with the Lions who haven’t travelled, so that’s always part and parcel of it. Until you’re on the plane and on the pitch for them you aren’t one.

“I’ve got to put in a performance tomorrow and hopefully I’ll stay fit and get on the plane. But I’ve a job to do tomorrow first.”

Asked what winning the title would mean to him, O’Mahony said: “Personally, it would make me very proud. I’m already very proud of what we’ve done this year, but I really think Munster deserve some silverware, because of how the supporters have been supporting the club, and the way everyone stuck together in the last few years. Even last year, when they had to qualify for Europe in those last three matches, the club has been really standing together. For me personally, it would be a great honour, but for the club and the supporters, they’re who needs a trophy, and hopefully we can get it today.”

Recent form suggests the Scarlets may have more about them. Knowledge of Munster tells you that they’ll rise to this occasion.