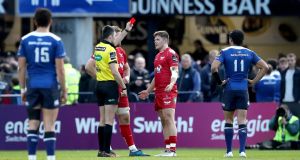 Scarlets’ Steff Evans is sent off by referee Marius Mitrea at the RDS. Photograph: Ryan Byrne/Inpho

Scarlets winger Steffan Evans is free to play in the Pro12 final against Munster this Saturday after the red card received during last weekend’s semi-final victory over Leinster was rescinded.

A disciplinary committee of Roddy Dunlop QC (Chair), Roddy MacLeod and Iain Leslie cleared Evans, by majority decision, after two of them accepted the tackle on Garry Ringrose in the 38th minute “only became dangerous as a result of the intervention” of Scarlets prop Samson Lee.

Evans was charged under Law 10.4 (e) - dangerous tackling - after Italian referee Marius Mitrea, having viewed the incident several times on the big screen in the RDS and consulted TMO Alan Falzone, that there was a “clear lift, twist and its clearly on his head. I have no option but to give you a red card. It’s a dangerous tackle. Safety of the player is first.”

However, the disciplinary panel accepted that a 2015 case, when Scottish forwards Ross Ford and Jonny Gray had three week suspensions for a joint-tackle against Samoa overturned on appeal, was grounds enough to quash the Evans dismissal.

“The panel having directed itself under reference to the decision of the Appeal Committee in Ross Ford and Jonny Gray (RWC 2015) decided, by a majority, that this meant that the red card should be rescinded,” stated the Pro 12.

Law 10.4 (j), which the Scottish duo had been cited for, states: “Lifting a player from the ground and dropping or driving that player into the ground whilst that player’s feet are still off the ground such that the player’s head and/or upper body come into contact with the ground is dangerous play.”

During the World Cup Pool game between Scotland and Samoa, South African referee Jaco Peyper awarded a penalty against Ford and Gray after they appeared to twist Jack Lam above the horizontal as the flanker contested Scottish possession.

“He survived,” said Peyper. “You lifted his legs but he survived.”

In the initial hearing both Gray and Ford were found guilty after it was decided that both their actions breached the “threshold of a red card.”

However, on appeal, it was accepted that if the “players individually attempted what would, if correctly executed, have been a legitimate action to roll (Lam)off the ball. As a result of their simultaneous actions, the situation became potentially dangerous. However, both players acted quickly and effectively to manage a safe outcome.”

Crucially, the appeals committee agreed, “if not for the contribution of the other player, neither of the players would have found themselves facing charges of foul play.”

Samson’s actions in the Evans tackle on Ringrose, despite the player being “twisted” above the horizontal and landing on his head, was deemed sufficient grounds, with reference to the Ford/Gray case, to free the winger to play at the Aviva stadium on Saturday evening.