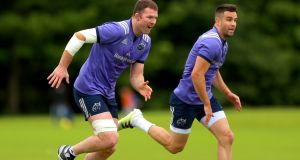 Conor Murray will make his 100th Munster appearance against Scarlets while Donnacha Ryan will play his 167th and final game for the province at the Aviva stadium. Photograph: James Crombie/Inpho

Munster and Scarlets have both named unchanged starting line-ups for Saturday’s Guinness Pro 12 final at the Aviva stadium (6.15pm).

Munster director of rugby Rassie Erasmus keeps faith with the matchday 23 that defeated Ospreys for a tilt at another Welsh side as they look to win their first league title since 2011.

Donnacha Ryan will win his 167th and final Munster cap, with outside centre Francis Saili and replacement Jean Deysel also set for their final involvement with the province.

Meanwhile, having made his debut as an Academy player away to Connacht in April 2010, scrumhalf Conor Murray will make his 100th Munster appearance on Saturday and becomes the 10th player of the current squad to reach the milestone.

Scarlets head coach Wayne Pivac has rewarded the side that secured an emphatic victory over Leinster for the decider in Dublin.

Steff Evans had his 47th minute semi-final red card rescinded and is named on the left wing while scrumhalf Gareth Davies will mark his 150th appearance for the region.

Scottish captain John Barclay will remain at the helm in Ken Owens’s absence as he looks to lead his side to a first championship winning victory since regional rugby’s inception back in 2003/04.

The Scarlets will be looking to do the double on Munster on Irish soil having already secured a victory at Thomond Park earlier this season. Munster beat Scarlets on the opening day of the season at at Parc y Scarlets in September.

Looking ahead to the game, Pivac said; “We know they’re a very good side. You don’t finish top after the round robin stage for nothing. They’ve got the best defensive record in the championship and they’re a side that we have a lot of respect for.

“We took some confidence out of that win [at Thomond Park] but it’s going to be a different occasion altogether. We have to make sure we go out there and play our game and enjoy the occasion.