Key to victory lies in battle of opensides 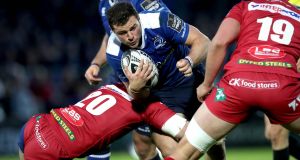 The Scarlets close down Leinster’s Robbie Henshaw in the Guinness Pro12 semi-final at the RDS. Photograph: Ryan Byrne/Inpho

Munster men and Manchester men are much alike. I recall the great Anthony Foley comparing his Munster team of the noughties, the one he captained, to that of Roy Keane’s in Manchester.

Both in red and both dominating their foes in equally ruthless fashion. Both have suffered hugely this season and both will win trophies in the same week.

What was special about those two teams? Put simply they both would do anything to win. Nuts and bolts aside, both managements were equally ruthless in knowing who to pick and who to drop for that win.

Scarlets have improved this season and could win on Saturday. Thrashing Ospreys three weeks ago and humbling Leinster last weekend are sufficient barometers. But over the course of the season they’ve improved their position as well in the Guinness Pro12.

After 22 games last season Scarlets were fifth on 63 points. This season they are third on 77 points. That number would have put them in first place last season so the league has improved along with Scarlets. But I still feel Leinster should have taken them.

Their try scoring, although modest in comparison with Leinster’s 99, is still hugely improved on last season; 45 becoming 66. But it is their defence that is all important. They are far meaner in the concession of tries, dropping from 54 to 40.

This is a swing from last year of -9 tries to +26. Obvious improvement on the bonus points etc, but why is this happening?

How could Scarlets outscore Leinster, an Irish team that has scored 99 tries in 22 Guinness Pro12 matches, putting them miles ahead of anyone else? Well Scarlets scored three tries but crucially limited Leinster to just two.

Their secret? Where is Scarlets’ defensive strategy taking them? Are they attacking a certain centre of gravity? Where are a free-flowing team like Leinster being made vulnerable?

Leinster exited with Scarlets, with second row Lewis Rawlins tackling and centre Scott Williams making a meek effort to steal. Scarlets didn’t engage the breakdown affording an exit flow to Leinster. The next carry was tackled by prop Rob Evans, with his backrow colleague Aaron Shingler not really bothering to effect anything, just taking a quick look and disengaging back to the defensive line.

So here is what Scarlets wanted. The next flow from scrumhalf Luke McGrath hit Johnny Sexton, who popped to the electric Garry Ringrose, receiving inside his 22 but crucially in the middle of the park.

Of course he looked to gain advantage but Scarlets’ hooker Ryan Elias cut him down and then Scarlets’ openside James Davies engulfed Ringrose in a total dog fight.

He wrapped his arms and legs around the felled centre and the clock started to tick. The first two breakdowns were not contested and McGrath simply swept the ball onwards to the next carrier but on the third Scarlets had a plan to contest.

I say opensides because over the course of the season Josh Macleod and others have been equally adept at Davies’s openside role. This is no coincidence and has been practised.

Clearly Scarlets let the first two carries by Leinster slide by but by the third they pounced. I have long noted the value of Peter O’Mahony; the obvious place at defensive lineouts but it is his post-tackle work that is of huge value.

Yes he gets turnovers and key ones but on Saturday Munster face a powerful version of the same. However there is a difference. Where O’Mahony prowls around like a rabid dog hunting for that counter-ruck or turnover, he does so often as a lone wolf. Scarlets on the other hand work as a team for this end.

That opening salvo is but one of many times a Scarlets’ openside has stunted at best or destroyed at worst an opposition’s flowing attack.

Keep your eyes peeled on their openside and the value he brings to the Scarlets’ defence. He may not get the turnover but watch the recycle clock.

Liam Williams is wonderful to watch in broken field, but Munster need to neutralise the Scarlets’ opensides who may be in the bowels of the breakdown but at the heart of their defence.

PS. Yesterday, in the careful hands of St James’s Rachel I discovered the reason for hobbling these past two months. The MRI confirmed plantar surface abnormalities (broken toe) and with it a long lecture centred on behaviour and a going away present of a “boot” to immobilise my toes. The reason for this injury? Five minutes in the RDS on Paddy’s Day, 17th March; Ireland v England #PlayingforAxel. Come on Munster, get the job done!