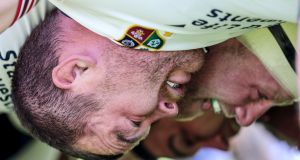 The Lions in training ahead of the tour of New Zealand. Photograph: Dan Sheridan/Inpho

By rights the Lions coaching staff should have a minimum of two weeks in camp with their entire 41-man squad to cram their workload for the most daunting assignment imaginable. Maybe one day, though most probably not, and certainly not this time.

Small mercies, in the shape of those defeats for bulk suppliers Leinster and Saracens, meant the 14 in camp last week in Wales became 30 this week at Carton House in Maynooth. And come Sunday’s farewell dinner and Monday departure to New Zealand the figure will become 41, assuming no further withdrawals. This week’s glorious sunshine was thus welcome, but the preparation has still been piecemeal.

Maximising this limited and incomplete time together is imperative. Asked for the coaches’ parting words to the 30 who returned home for three nights, defence coach Andy Farrell said: “There’s been a lot of work done . . . You don’t come back on Sunday having not done your revision and having to go back over things. We have to keep hitting the ground running and moving on to a different level every single time we meet up.”

Farrell emphasised the need to take stock of what had been done, “how can you . . . make it better next week”.

Head coach Warren Gatland intimated this week that the remaining 11 players involved in this Saturday’s Pro12 and Premiership finals are already playing catch-up a little, albeit they have a chance to catch the eye as well.

“We’ll be watching those games and we wish them all the best,” said Farrell. “We’ve got our fingers crossed that they stay fit and healthy and get on the plane, that’s what we want. We want everybody on that plane.”

Farrell added: “Look, the 14 guys who were in last week; they have helped the new guys who are coming in because they have got a head start. The more of those guys you’ve got the better. We’ve got 30 of them – when we get the next 11 to follow I expect that to be a lot easier than it has been over the last couple of weeks because this is the type of quality that we’ve got. They’re all leaders, they all know what they want to make their game a lot easier and that’s making sure that everyone’s on the same page.”

In his domain of defence, Farrell has rarely faced a more potent threat over such an extended and intense period of time.

“Their try-scoring record is fantastic,” he said of the All Blacks. “I think last year it was double the team in second for tries scored, which says a lot about their type of game . . . Their percentage conversion rate is fantastic, so we know defence is going to be a massive part of our game if we are going to have a chance in the series.”

Farrell said that at this morning’s training session “we tried to disorientate the players a little bit, put them in pressure situations . . . and they handled it very calmly under extreme pressure. The quality has been outstanding. There are different (defensive) systems, but there are a few principles that are very much the same throughout the four nations and throughout world rugby. We will be on the same page and that’s all that matters.”

Meanwhile, the horrific events in Manchester last Monday night shocked millions and among those deeply affected have been the players and backroom team in the Lions squad. This was particularly true for their “absolutely devastated” defence coach Farrell, a Lancashire man, born and reared in nearby Wigan.

“I’m from the area. I live 20 miles up the road and it’s utter devastation. I’ve been to that concert place many a time with my kids over time and you’d never expect anything like that to happen. Our hearts and our prayers massively go out to the people of Manchester. You just know that the people who live in the area they’ll all pull together and unite in this tragic event.”