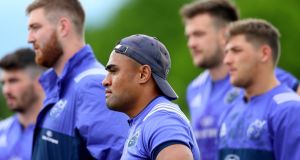 Francis Saili is to leave Munster at the end of the season. Photograph: James Crombie/Inpho

Munster have confirmed that Ian Keatley and Jaco Taute will remain with the province for another two years but that Donnacha Ryan and Francis Saili, amongst others, will leave at the end of the season.

However, Saili partners Rory Scannell in the centre for Munster’s Pro12 semi-final against Ospreys, with Taute among the replacements.

While a fit-again Conor Murray starts at scrumhalf for Saturday’s match at Thomond Park.

Keatley, only the second Munster player to score 1000 points for the province, made his debut in 2011 and has racked up over 150 appearances. The 26-year-old Taute initially arrived on a short-term loan basis from the Stormers but that was extended first until the end of the season and now by a further two-year contract.

The South African’s retention meant that Munster weren’t in a position to keep Saili too, and it now looks like the New Zealand who played 38-time for Munster over two seasons, scoring eight tries, will join Aviva Premiership club Harlequins.

Saili was unfortunate with injuries this season and there is no doubting his ability as he demonstrated when fit.

Ryan, will make the move to French Top 14 side Racing 92 at the end of the season. The 33-year-old has made 165 appearances since making his debut against Ospreys in September 2004.

The Nenagh-man enjoyed Heineken Cup and Magners League success over a 13-year-career in the red jersey and was awarded Munster’s Player of the Year in 2012.

On the international front he has made 47 Ireland appearances, lining out in two World Cups (France 2007 and England 2015), and last November played a pivotal role in Ireland’s historic victory against the All Blacks in Chicago.

Prop Peter McCabe and lock John Madigan are also set to depart at the end of the season, while centre Cian Bohane and lock Mark Chisholm have both confirmed they are to retire from professional rugby.

Munster’s Director of Rugby Rassie Erasmus said: “I would like to take this opportunity to thank each of our departing players for their service to Munster Rugby. Each individual has contributed to the province and played a role in our development and success to date.

“In recognising a stellar career for the province I would like to single out Donnacha Ryan for his outstanding service to Munster Rugby for over 13 years. He is a leader on and off the field and has passed on his experience and knowledge to the next generation. We wish Donnacha and all who are leaving all the best for the future.

“Of course there is still rugby to be played with a huge semi-final against Ospreys this weekend, giving our supporters the chance to bid farewell in what is the final game of the season in Thomond Park.”