Champions Cup organisers up the ante for Italian clubs 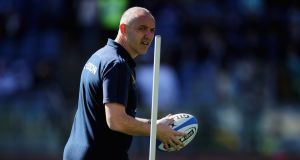 Italy head coach Conor O’Shea: “I absolutely agree with it and feel it is something that should have been in place a long time ago.” Photograph: Paolo Bruno/Getty Images 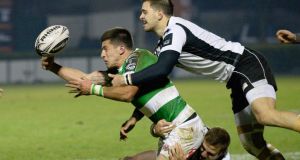 From next season Treviso and Zebre will have two routes into the Champions Cup: finish in the top seven of the Pro12 or win the Challenge Cup. Photograph: Dino Panato/Getty Images

Respect, in all aspects of life, even for those born with silver spoons in their gobs, must always be earned.

And so, after repeatedly trying to entice two competitive club entities out of Italian rugby with a softly, softly approach, the Italian rugby federation (FIR) is finally smacked with some tough love.

Same rules apply for everyone now.

From next season Treviso and Zebre – or whatever the latter might become (Lazio has a nice ring to it) – will have two routes into the Champions Cup: finish in the top seven of the Pro12 or win the Challenge Cup.

Zebre presuming they manage to control their chronic debt will have a crack at Europe’s secondary tournament in 2018, while Treviso, one last time, have gained entry to the heavyweight division despite another abysmal showing.

Five wins from 22 Pro12 outings may be their best return in three seasons but the point holds.

Darwinism is alive and well, evolve or die is the clear message sent out by the Champions Cup organisers.

“I absolutely agree with it and feel it is something that should have been in place a long time ago,” said Conor O’Shea, the man charged with transforming the Italian national side into something resembling a competitive force come the 2019 World Cup in Japan (granted, they were drawn in a horrid group alongside the All Blacks and Springboks).

“It’s a very positive move for the Pro12 league and Europe,” O’Shea continued. “We are very supportive of it.”

A practical man to his fingertips, O’Shea is willing to stake his coaching career and reputation as an organisational savant (see the turning of post-Bloodgate Harlequins into Premiership champions within three years) on the Azzurri believing they are sipping from a half-full glass.

And he’s right. This ups the ante for everyone. The Challenge Cup just got very interesting and while the Italians will almost certainly be choked into submission along that route, a top seven finish in the Pro12 was something Treviso achieved, with 10 victories, as recently as 2013 (when Connacht finished eighth).

“Everyone has seen the positive impact that meritocracy has had on the Guinness Pro12 since it was introduced in the 2014/15 season,” said league chief executive Martin Anayi who can draw a line through the Italian problem in the next round of negotiations with broadcast partners.

So everyone is in agreement. Club rugby in Europe just got stronger and all it took was a dollop of common sense.

The rider also matters. In the event that the Challenge Cup winner qualifies through their league standing, the team that loses the final will take their place.

The best solution tends to be the most simple.