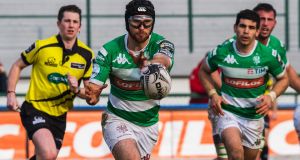 Italy coach Conor O’Shea has handed Ian McKinley the opportunity to make it on to the Azzurri’s summer tour to the southern hemisphere after naming the Benetton Treviso outhalf in a 44-man training squad.

It marks an incredible turnaround in McKinley’s rugby fortunes after he lost the sight in his left eye as a result of an accident during an All-Ireland League game playing for UCD against Lansdowne in 2010.

McKinley underwent a three and a half hour operation and recovered a maximum 70 per cent vision in his injured eye, going on to make a try-scoring Leinster debut against his present club in 2011.

Complications led to further surgery in the left eye after he suffered a detached retina and he lost sight in the eye.

Working off a design from a master’s student at the National College of Art and Design, a prototype pair of protective eye goggles were developed by Italian eyewear company Raleri that allowed McKinley return to rugby with a third division side in 2014.

He then earned a two-year contract with Viadana in the top tier of Italian club rugby, providing cover at Zebre during last year’s World Cup and Six Nations before moving to Treviso.

The 27-year-old Dubliner has played in 20 of Treviso’s Pro 12 league fixtures, starting 12 of those, including the side’s last eight matches.

The squad will be trimmed down to 31 for the games against Scotland in Singapore and the matches against Fiji and Australia.