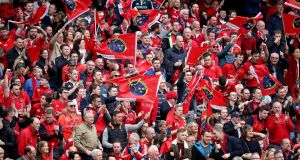 Munster’s fans have traversed Europe, lending colour and enthusiasm to places where such qualities are not always universal Photograph: David Rogers/Getty Images

Imagine, for a moment, it is 2023. People have had enough of politics and onrushing global warming and need something more fun to talk about than imminent Armageddon, assuming it has not already happened. What better than a Rugby World Cup, still relatively pure of heart compared with the football version held in Qatar the previous year? If ever there was a moment to showcase the sport as a force for good, this is it.

Where, then, should this feelgood event ideally be held? Where will it not simply generate a few quid but create the kind of positive vibe that might make sponsors, advertisers and TV companies wonder whether rugby merits a bigger slice of their pie? Where will rugby’s most compelling virtues and off-field spirit be best illustrated? There are three different options on the table – South Africa, France and Ireland – with an independently assessed recommendation due to be made this summer and a final vote due on November 15th.

From a seat in the Aviva Stadium over the weekend, with the Fields of Athenry being belted out at full volume, the answer felt almost too obvious. No country breeds more committed rugby supporters. For years Munster’s fans, in particular, have traversed Europe, lending colour and passion to places where such qualities are not always universal. Mix in the diehard followers of Leinster, Ulster and Connacht as well and local enthusiasm for rugby union, albeit in its provincial format, is hardly in short supply.

Then there are the intriguing backdrops: among the proposed grounds are not merely the 82,300-capacity Croke Park, the third-biggest stadium in Europe, but other Gaelic strongholds such as Cork’s Páirc Uí Chaoimh, Killarney’s Fitzgerald Stadium and Antrim’s Casement Park. New Zealand in Limerick, South Africa in Belfast, Australia in Galway: the novelty factor is strong, the video promoting Ireland’s bid suitably persuasive. Short of each overseas visitor being promised a selfie with the Corrs, the package could not be more beguiling.

At this point, of course, caveats are meant to sweep in like sheets of grey Atlantic rain. There are about 6.5m people living on the island of Ireland, with only one venue capable of holding more than 52,000 and there will not be the same financial returns as England 2015. Are people in Derry really going to pay to attend Tonga v Uruguay? The Irish government, though, is right behind the project and the €120m fee for hosting the tournament has been guaranteed. The Irish do not see why, simply because France and South Africa are bigger nations, they cannot organise a world-class knees-up to which everyone would crave an invitation.

France, furthermore, staged the World Cup as recently as 2007. Their bid involves many of the same stadiums as a decade ago and, for that reason, it feels a slightly overfamiliar rendezvous. Admittedly the 2007 event was a logistical triumph, the French are hoping to sell a million more tickets than Ireland’s projected two million and the fans of Clermont Auvergne and La Rochelle were gloriously noisy, colourful ambassadors at the weekend.

Other factors, though, must be taken into account. Global security concerns will, it must be hoped, ease one day but, as things stand, there are no guarantees. Paris, in addition, is in competition with Los Angeles for the right to host the 2024 Olympics, with that decision due to be taken this September.

What of South Africa? It is only a year ago that their sports minister Fikile Mbalula was insisting no bid could be mounted because the process of transformation in Springbok rugby was not sufficiently advanced. That stance has since been retracted but South Africa rugby is not in the most stable place. The pitifully small crowd watching the Lions play the Jaguares at Ellis Park last weekend may be partly down to the declining spectator interest in Super Rugby generally but, with Durban having been stripped of the 2022 Commonwealth Games hosting rights, the timing of the RWC bid feels less than ideal. Based purely on form over the past year, furthermore, would South Africa be guaranteed to reach the 2023 knock-out stages? It would feel a very different tournament if the entire country are not fully behind the Springboks.

The indications, however, are that the race is not yet over. The technical bids are being painstakingly assessed, the geopolitical landscape is being carefully monitored and any recommendation will not be made on a whim. These processes have to be scrupulously fair, with the confirmed changes to the global fixture calendar from 2020 ruling out the horse-trading of fixtures that once shaped such outcomes. But step back for a moment, take a breath and ask what would capture people’s hearts and minds most in 2023: a Rugby World Cup in Ireland, France or South Africa? The answer, by a neck, is Ireland.