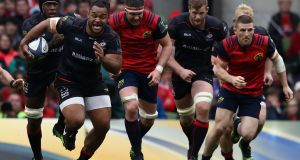 Saracens’ Billy Vunipola breaks through during his side’s victory over Munster in the Champions Cup semi-final at the Aviva Stadium. Photograph: David Rogers/Getty Images)

After soaking up Munster’s full frontal offensive, devoid of nous or creativity, Owen Farrell and his five other Lions delivered a clean victory. It could have been worse. Unforced fumbles by Richard Wigglesworth and George Kruis, in either half, meant Saracens left two tries behind them.

Munster coach Rassie Erasmus labelled it a hiding. The Springbok coach in waiting – a few weeks ago he told the Munster players he was staying in Limerick – also said Saracens “were 15-20 points better than us” but would that have been the case if Conor Murray was out there?

“Tactically,” Erasmus conceded, “there is a lot we can improve upon . . . There was a mental pressure they put on us and they squeezed the life out of us.”

Munster missed their primary decision-maker on so many levels. The halfbacks kicked poorly yet regularly. Their bulls careered and crashed into an unbreakable Saracens wall, providing Brad Barritt, Michael Rhodes, Maro Itoje and Kruis with the sacrificial CJ Stander, who they smashed backwards with a ferocious physicality to keep them on track for the double-double.

All the while Tyler Bleyendaal cut a lonely figure in the pocket. All the while Duncan Williams rigidly adhered to pre-planned protocols. They not only lacked experience, they were nowhere near the quality required to mastermind a victory over Mark McCall’s brilliantly efficient Saracens.

It is hardly the fault of the 31-year-old reserve nine. No Irish scrumhalf has ever possessed Murray’s poise combined with head-swivelling ability to change tack when split-second opportunities present themselves despite snarling cranes, Itoje and Kruis, looming overhead.

Hand-cuffed to the game plan, Williams box-kicked 12 times before the 50-minute mark. Saracens had done their homework, disrupting the left footer’s flight path enough for Billy Vunipola to gather and counter. Two punts sailed out on the full yet despite these painfully obvious failings, Munster ploughed on.

“We wouldn’t change tactics,” said Erasmus when offered a mulligan, “but we would adapt quicker to the way they changed the game. We kept exactly the same game plan because it was working. We just missed a penalty kick and didn’t score a few maul tries.

“When they started to kick to the corners and really started to put pressure on us in our 22 . . . we should have kicked it back long or run if it was on. That’s what we didn’t handle well.”

The fact remains that Munster’s creative core was unable to grasp this dire need for invention when entrenched in the battle.

Bleyendaal’s restarts, and the resulting chase, proved seriously damaging at moments when Munster desperately needed to ratchet up the heat.

In retrospect, minutes 25-35 proved seminal. A brilliant Vunipola steal over a grounded Niall Scannell was the beginning of Munster failing to capitalise on Jackson Wray’s sin-binning for stiff-arming Williams. Zero points were registered during this period, a malfunctioning maul did not help, while the ping-ponging approach prevailed until Farrell’s tap-tackle on Bleyendaal. Itoje did not hide his delight as Saracens packed down for the scrum, dead centre and 30 metres out, which resulted in Vincent Koch forcing Dave Kilcoyne into “hinging”.

Farrell made it 6-3 but from the restart, Vunipola slipped the attentions of Taute, Andrew Conway and Niall Scannell to rumble 50 metres down-field.

The game was by no means gone but, have no doubt, Saracens broke Munster at source in the second half. Stander, running on an injured ankle, was supposed to play 50 minutes but had to go all 80 when a battered Tommy O’Donnell was forced off. Jean Deysel arrived and promptly cracked his ribs trying to halt Kruis.

Then, seconds later, Peter O’Mahony suffered a sickening head blow tackling Mako Vunipola. Laid out on the grass, the captain rose to shrug off the medic, re-entering the line to keep with the perpetual motion that threatens to severely damage rugby union in a way concussion can never hinder American Football with its stoppages every few seconds.

Romain Poite went over to inspect O’Mahony, saying “HIA – replacement six red,” before the injury was relayed to the media as “blood” until Erasmus confirmed a concussion post-match.

From the resulting Munster scrum on their five-metre line, Bleyendaal – another to recently suffer a concussion and a separate illness – sliced the ball into touch perilously close to his own try-line. The lineout drive was collapsed inches short but the second phase saw Mako Vunipola batter through Earls and Taute.

Farrell’s conversion made it 13-3 but the 45,658 crowd witnessed Munster’s refusal to go quietly. They pounded into Saracens and when Schalk Burger raced offside Poite offered Bleyendaal a chance to make it 13-6. He missed.

Bleyendaal has had an impressive season but the returning JJ Hanrahan was the biggest winner on Saturday. The New Zealander never grabbed hold of this semi-final – like his predecessor could – and never demanded possession to alter the point of attack.

The Saracens scrum, and unerring Farrell, made it 16-3 on 63 minutes.

Bleyendaal all but waved the white flag by dropping a goal, which bounced off the lower post, after his pack ran clean out of ideas following 18 punishing phases that could not breach the Saracens 22.

A calamitous two minutes followed, as Zebo then Conway were dispossessed, before Farrell rolled a sumptuous grubber for Chris Wyles to twist over.

“We’ve come this far in nine months,” said Erasmus. “We will be better in a year’s time but we have to get more strings in our bow. We can’t just go in with one game plan and think that will work specifically.”