Marmion and Connacht still have goals to chase this season 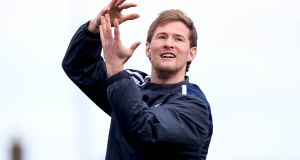 Kieran Marmion is hoping to add to his caps on the Ireland summer tour to America and Japan. Photograph: Donall Farmer/Inpho

The outgoing champions may be on the outside looking in when the Guinness Pro12 semi-finals and final come around this season but Connacht’s season is far from done. They will contest the four-way playoffs to qualify for next season’s European Champions Cup, and were they to complete that circuitous route, it would go some way toward salvaging their campaign.

They play what could be their final home game of the regular season, and thus Pat Lam’s final match at the Sportsground as head coach, against the Scarlets on Saturday night, before facing Munster in Thomond Park seven days later.

They are likely to finish eighth and thus an away semi-final playoff against the seventh ranked Top 14 side on the weekend of May 19th/20th/21st. Were they to win that they would then host Cardiff or the seventh-ranked Premiership side at the Sportsground the following weekend.

“That’s the main goal, making sure we qualify for that,” says their scrumhalf Kieran Marmion. “Obviously we’re a bit disappointed with where we are in the table but we’ve a lot to play for and if we can get into next season’s Champions Cup we can call the season successful. That was the primary aim at the start of the season.”

As to why Connacht haven’t scaled the heights of last season, Marmion admits this season’s Champions Cup, in which they beat Wasps and Toulouse, has affected their league form, which was compounded by a slow start and poor away form.

“No-one takes us lightly any more, and our away form has been pretty unacceptable. Losing away to teams like the Dragons and Zebre has also put a dampener on our season, and we had tough reviews after those games.”

“We haven’t been as clinical; there were a lot of individual errors which weren’t happening last season. We looked back at games and the chances we had to score only for someone to drop the ball or make a bad pass. Last season we just weren’t doing that. Maybe there’s been a loss of confidence.”

Ironically, Marmion was at the Aviva Stadium in his role as an ambassador for Mazda, who have been announced as an official partner of the Guiness Pro12 final series – the semi-finals and final – the same weekends as those aforementioned playoffs.

Leinster will host the first semi-final at the RDS on Friday, May 19th, with Munster requiring two more points from their final two games to secure home advantage for the second semi-final on Saturday, May 20th. An estimated 25,000 tickets have already been sold for the final, which will be held at the Aviva Stadium on Saturday, May 27th.

The distraction of the playoffs will be welcome. “Watching Leinster and Munster in the semi-finals, and maybe Ulster, will make it tough to watch. This is where we want to be, all the more so after getting a taste of it last season.”

Yet despite Connacht’s anti-climactic campaign, in some respects this has been Marmion’s best season on a personal level. “I’ve just been trying to keep my head down and work away, and I’ve got a few opportunities which maybe I haven’t had in the past, so that’s obviously great to have. Pat gives me a huge licence to play my game in Connacht which is great for me, and I can be thankful to him for that. It helps me push on.”

With Ireland, there is a bigger emphasis on a scrumhalf’s kicking game, where Conor Murray has set a high standard. “I enjoy playing that kind of way as well. It makes me build my game as a whole. What I learn there [with Ireland] I can bring back to my game with Connacht, and then bits of my game with Connacht I try to bring to Ireland. It’s all making me as much of a rounded player as possible.”

It was at the Aviva, a little over five weeks ago, that Marmion made his first Six Nations start in helping Ireland to victory over England. “That was a great day, a huge game for Ireland, in where we finished in the table as well.

“It would have to be the biggest game I’ve played in, and great to get the victory as well. I can take a lot from that game. It gives me a lot of confidence to go back to Connacht with, and I can push on from that experience.”

The next target is adding to his two Test starts on the summer tour to Japan and America. “I’ll hopefully get on that tour and get more game time, play as well as I can and keep moving forward.”

He’s also feeling the heat from Luke McGrath, who’s had a fine season. “It’s good to have that competition. The two of us will push each other as much as we can to get up to Conor’s standards as well, and that’s good for Irish rugby as well.”

Still only 25, there’s plenty more to come from Marmion.

“I certainly want to get a lot more Irish caps, and I want to win a few more trophies with Connacht as well, so obviously a lot more to achieve and that’s what excites me as well.”