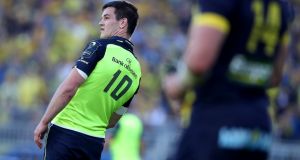 Leinster’s Johnny Sexton: “I don’t think you always have to go through losses to be successful.” Photograph: Dan Sheridan/Inpho

From the ashes of a Champions Cup semi-final defeat, there is a resolve among the Leinster players that the enduring legacy will ultimately be a positive one.

There is still silverware to contest this season in the Guinness Pro12 and Leinster must redirect their focus. They’re also aware that examining the considerable progress the squad has made since last season through the prism of a single defeat threatens to give a skewed perspective.

The overriding ambition is to finish the season unbeaten because that would validate, with the tangible reward of a trophy, all the hard work, sacrifice and the collective and individual improvement at the province.

Speaking at the launch of the Bank of Ireland summer camps, Jonathan Sexton, offered a player’s eye view of the rugby journey undertaken in the last 10 months. “We have come a long way, we don’t need results as such to show how far we’ve come.

“Where we want success is for ourselves, for the effort that we’ve put in throughout the year, from day one, the amount of sacrifice that goes into it. That’s why you want to win.

“In terms of showing how far we’ve come, I think we’ve shown that. That’s not being arrogant or anything like that, it’s just we have come a long way in the environment, the culture, the attitude everything. It’s come full circle.

“It feels like back to the days when we were winning European Cups for fun. I remember walking around after we won three in four years, and it was easy. It felt like, ‘we’ve got this cracked now, it’s going to be like this every year.’

“Five years later, you’re still waiting to get into another final. It just shows what a special competition it is to win, and I suppose how special that team was as well to win three in four. It’s only now that you look back and go, “wow, that was pretty special.”

He walked onto the Croke Park pitch in that semi-final win over Munster in 2009 as the outhalf on a mature team. The one he currently plays for is less established, but it’s one he believes has the capacity to capture a fourth star for the Leinster jersey.

He doesn’t subscribe to the notion that all successful teams are forged in the flames of defeat along the way, though. “I don’t think you always have to go through losses to be successful; I don’t believe in that, but a lot of teams do have to.

“I think we were as motivated as we have been for years. Just, like we said there, the small little differences that a decision can make or a penalty. All the young guys and the older guys need to take lessons from it and come back stronger for the rest of this season and next season.”

He argues that results and rewards are the byproduct of high-quality performances. “It’s living up to the values and goals that you put in place at the start of the year, and then if the results and trophies come at the end of it, that’s an added bonus.

“Like I said, one decision can change your whole season. One refereeing decision can decide whether you win a trophy or not. So does that make it a success or a failure? For us, it doesn’t, once you give it everything.”

He’s happy to be one of the players to drive standards on the premise that he sets a high bar personally; that being said, he stressed there was no complacency in Lyon.

“I have a role to play as vice captain; you need get that right, to know when guys need to be told that wasn’t good enough as opposed to ‘look guys, we need to take positives from this and build on it. That can be a turning point for us.’

“No one went out with the wrong frame of mind. They went out mentally and physically in a great place but we just didn’t manage to start the game right.” The challenge is not to compound one playoff disappointment with another.  He admitted: “Last season we didn’t win anything, we didn’t deserve to win anything. Hopefully this season we’ll be on the other side and we will deserve to.”