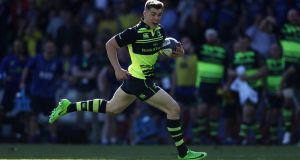 Arguably exposed defensively as Clermont poured through for their early tries but was superbly elusive to spark the Leinster revival. Rob Kearney probably would have caught that late Clermont restart. Rating: 7

Typically confrontational showing from the veteran winger who forced his way into the team and thereby removed the try scoring talents of Adam Byrne in the process. Replaced by Zane Kirchner for last 10 minutes and the Springbok promptly ran out of play. Costly. Rating: 6

Warren should have listened to Andy Farrell. Only the rarest talent scores that 67th minute try. He can take enormous punishment as one blind-side tackle showed. Brilliant inside-out swerve tore open Clermont’s midfield to put Carbery into space. Rating: 8

Avoided a second yellow (and red) card by the common sense of Nigel Owens as the game swung back Clermont’s way. Deserved the sin binning but seemed to tug David Strettle’s jersey as Carbery was caught flat footed in defence. Rating: 7

Brilliantly efficient. Kicked everything - even that rapid late penalty (world class stuff) - and avoided heavy punishment while managing to hardly ever annoy Nigel Owens. Gambled with that short 22 drop out that led to Camille Lopez match winning drop goal. Rating: 8

Prone to the occasional error - remember, this is his first season as the starting scrumhalf - but showed well against the class of Morgan Parra, saving Leinster a few times with his cover defence and box kicking. Jamison Gibson-Park is the ideal replacement as the tempo increases. Rating: 7

Only lasted a bruising hour under the Lyon sun which was surprising considering Cian Healy’s suspension. Peter Dooley came in to reinforce Leinster’s depth in the position but Healy’s impact was sorely missed in comparison to what Clermont options. Rating: 7

Played well, growing into the disastrous first half but his impact sub, Sean Cronin, made some defensive and handling errors when Leinster needed him to puncture the Clermont defence. Rating: 5

Emptied Nick Abendanon in midfield and was one of only two from the Leinster front five, the other being McGrath, who showed up in the physicality stakes as Clermont ran riot in the opening 15 minutes. Rating: 7

Scooped up and driven backwards in the early exchanges but Toner’s value these past few years has been his engine. Recovered and worked his heart out for the entire 80. Rating: 5

Honest journeyman but Scott Fardy is looking world class in Super Rugby this season. Ross Molony was more noticeable in the ball carrying stakes when he came on but the game had opened up. Rating: 5

Immense. Bullish carrying covered the loss of Sean O’Brien as a consistent string of calf injuries were shelved for this one herculean 80 minute effort to force Leinster over the gainline. Rating: 8

Sliding doors. Imagine he released Aurélien Rougerie’s ankle just before the officials felt he impeded the centre from covering the Joe Schmidt designed break that led to Leavy regaining his feet and running a phenomenal support line for the game defining try. Rating: 7

When Jamie Heaslip does eventually take leave of the Leinster and Ireland eight jersey, Conan looks primed for a long term innings of his own. Heaslip’s engine remains superior but carried as good as any man on the field (except Fritz Lee). Rating: 7