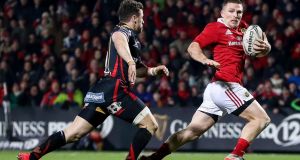 Andrew Conway on his way to scoring a try against Newport Gwent Dragons at Musgrave Park. Photograph: Tommy Dickson/Inpho

The métier of schools rugby introduced Andrew Conway as a player of prodigious ability but paradoxically it also compromised his development, a state of affairs that only become evident once he left its confines and headed for the professional arm of the sport.

Even in that company, Conway stood out, his attacking prowess requiring little more than a modicum of space or time. However, there was very little stress placed on other aspects of his game. Two years on the Ireland Under-20 team, saw him quit the age-grade as the joint-leading try-scorer (10) in the history of the Junior World Championship alongside future All Black Zac Guildford. He continued to flourish.

However, like a host of outstanding teenage players the rite of passage to professional rugby provides a more rigorous examination mentally and physically. Weaknesses are amplified during the acclimatisation process; there is little respite when trying to wrangle injury, opportunity and performance and finish on the right side of the ledger, initially a small fish in a lake.

Three years at Leinster was followed by a decision to move to Munster in 2013. The late Anthony Foley had tried to pinch him as an 18-year-old a year before Michael Cheika gave him his first start in a senior blue jersey.

The integration took some time, picking up a few splinters in his first season in Munster, but in refining his game, he identified areas where talent alone would not suffice. A reward for that dedication and development came when made his Ireland debut as a half-time replacement for the injured Keith Earls in the recent Six Nations Championship win over England.

It also represented a return on a series of consistently excellent performances for Munster. Conway (25) offered an insight into that journey.

“In years gone by I would have performed quite well and then the week after maybe had a poor performance and then performed well for two weeks. There is an element of that.

“The difference is in the holistic preparation. I think about it a lot more. When I started off it all happened very quickly for me. I probably thought it was all going to continue to happen quickly. How did I get to this point? I’ll just continue doing that.

“The higher the level you go up, the more rounded you have to be as a player. I would probably have judged myself by how many breaks I made, how many tries I scored or how many metres I made off a counter-attack.

“[However] some of my best games for Munster could be [about] winning two or three balls in the air, being dominant in the collision, carrying hard, getting a few good rucks in; that’s the way the professional game is. It does take time to mentally adapt. It takes a while to find your own identity, what makes you effective. You refine things as you go.

“That’s a massive part of it, being your own man and realising what you are good at to drive you forward. It’s about me adding value to the team and the older you get the more you realise the importance of using your strengths while continuing to work on your weaknesses.”

Ireland coach Joe Schmidt, under whom he would have worked at Leinster, aided his evolution as a player. Conway had to switch from being subjective, in putting aside any frustration of not making national camps and squads, and instead focus on more tangible concerns.

He had to step out of the immediacy of his own situation and look at it objectively from the perspective of those determining selection. His first port of call was Schmidt. “I used to annoy Joe when I wasn’t near Irish squads. I would have known him from my Leinster time and cheekily stayed in touch with him.

“The emails would be long and detailed. That just shows the measure of the man because that would have been a time when I was a long way off playing in an international game, so for him to put that time aside was really generous, especially when you consider how much he is juggling as national coach.

“It does give you a lot of motivation that he is watching in detail. Some people might think that I did this in a game that wasn’t televised and not against one of the bigger teams but he would have seen it. It gives you confidence and the incentive to push and get better and better.”

He would like to go on Ireland’s summer tour but the only thing that concerns him now is today’s Champions Cup semi-final against Saracens.

The English club place a huge premium on their kick-chase game, funnelling opposing players into vice-like mantraps, or manhandling the catcher as he returns to ground.

“They have their primary chaser but not far behind you’ll have their hooker, men coming out wide and their centres flying up the [centre of the] pitch. It works really well for them because they have good kickers of the ball,” says Conway.

“If I am going up to catch it, I am being hit, man-and-ball. Our fix for that is to dominate in the air, get good communication in and if someone doesn’t have to go up don’t go up unnecessarily.

“[In attack] they’ll follow [Owen] Farrell, look for the big boys, who are going to potentially sit people down and then they will run little spot plays off them. They do it really effectively and that is why they are so good.

“There are three options all the time; Farrell or their first receiver as a carrier, the hit line [a phalanx of ball carriers] and the spot play; all three are live until the last second. You rarely see them take the wrong option.”

Saracens, lippy and chippy on the pitch, are an outstanding side and start as deserved favourites but Munster thrive on dismantling reputations. Meanwhile Conway is exactly where he wants to be.

1 Sideline Cut: Vignette shows why Bird is the true shark in The Last Dance
2 Anfield and Cheltenham show sports again lacking in looking after their own
3 Federer named highest paid athlete of 2020 as Covid knocks Messi off top spot
4 Liverpool and Everton to oppose plans to play games at neutral venues
5 Brendan Rodgers says he was ‘really knocked’ by coronavirus
Real news has value SUBSCRIBE