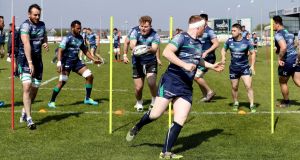 Connacht will have some of their front-liners back this week in a bid to redeem themselves after the “worst performance” in three years.

Connacht’s 12th defeat this season came at the hands of title-chasing Scarlets last Sunday evening, and Pat Lam says the team will be shaken up this week when they head to Thomond Park in a bid to prepare for their Champions Cup play-off fixture in England.

“Round one Glasgow – okay, we didn’t have a good pre-season – but round 21, unacceptable. For whatever reason why, it doesn’t matter now. It’s about the fact that it has to change, and there will be changes in the team. Those guys had a chance and now it’s other guys who get an opportunity to show up and redeem themselves as a whole group.

“Derby games take care of themselves, and it doesn’t really matter where it sits in the Pro12 table,” says Lam. “That aside, it’s Connacht v Munster, and we are going down to a Munster team that is humming nicely and having a tremendous season.

“So it’s a great challenge to try to find some form. There will be opportunities for players. If they can perform under pressure, it gives them a great shot for the play-off.”

Lam says Munster reflect the principles on which Connacht pride themselves.

“Munster passion, Munster fire, the common cause. You have to take your hats off for all those years they had two bases – I had no idea until I arrived here – and certainly over time and the way the world is, that is very difficult.

“But they moved to one base and obviously they have a great cause as to why they are playing. There are a tighter team, Rassie [Erasmus] has done a great job there, and so it’s a tough challenge. That is what we pride ourselves on, teamwork, working hard, and that is why we are so disappointed with last weekend because that is certainly not Connacht.

“It is a tough time, we’ve only beaten Munster once in 29 years, so it just emphasises the difficulty of going there – tougher than last year because of where they are now. Without doubt we are not in the form we want to be, and they are preparing to win the Pro12 and players are working hard to make the team.

“I know what they are going through. It’s a different dynamic for us – ours is fighting for places to get to Champions Cup rugby next year – still the same determination, but just a different prize.”

Lam says it is now all about redemption and the play-offs after that “horrific” display, particularly in the opening half when they conceded four tries to Wayne Pivac’s Welsh side.

“We could have won that game, we can win this game [against Munster], and if we have that bad game in the play-off, it doesn’t matter what has happened in these two games because of where we put ourselves. Ultimately this whole season rides on the play-off game, winning that, and getting into the final and winning that.”