Kiwi, who guided Connacht to the 2016 Pro12 title, sees his title change to director of rugby 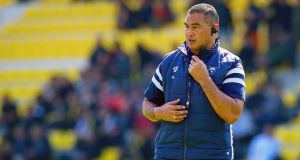 New Zealander Lam, who joined Bristol in June 2017, will remain at Ashton Gate on a deal until 2023 and will see his title change to director of rugby.

Club owner Stephen Lansdown said: “Pat Lam has reinvigorated this club and given us a clear purpose and direction for the future.

“He has created an environment and team spirit that the whole city has bought into.”

Lam, born in Auckland, captained New Zealand Schoolboys as a player before representing Samoa in three World Cups and moved to England in 1997 to join Newcastle Falcons, for whom he had two spells.

He spent three years at Northampton before moving into coaching as an assistant with Scotland at the 2003 World Cup and spent four years as head coach at Auckland.

Lam led Irish side Connacht in 2013 to the Guinness Pro12 title in 2016 before joining Bristol, who he guided to promotion and then a ninth-placed finish in the top flight.

“I’m proud to commit my future to Bristol and it was an easy decision to make,” Lam said.

“We’ve set out a plan to bring a Premiership trophy to Ashton Gate and we’re at the start of that journey.”