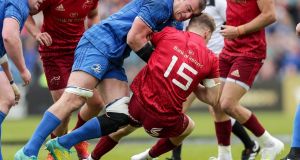 Munster are not Saracens. No other club team are capable of doing what Saracens do so effectively. The Champions Cup final proved as much. As did last Saturday’s Pro14 semi-final.

I understand why Munster attempted to trace the Wolf Pack blueprint on to the RDS pitch. It made sense on one level: Leinster had been bloodied and bruised at St James’ Park seven days previously. They were there for the taking if dragged into another physical war.

Munster lack power athletes to replicate the damage caused by Billy Vunipola, Maro Itoje, George Kruis and Will Skelton. That was obvious. What we could also see is Munster cannot expect progress by these methods.

CJ Stander got one early bump on Ruddock to make yardage. That was the highlight reel. Van der Flier put the rest of the red runners to ground – even ripping ball and a few turnovers – during his 25-tackle exhibition.

Innovative coaching, as Irish rugby has learned to our enormous benefit under the guidance of Joe Schmidt and more recently Stuart Lancaster, is how Munster start winning trophies again.

Jean Kleyn and Arno Botha are decent club players, but there is a reason the Springboks are not bringing them back into the fold. They are not big enough. Skelton and Vunipola carried three or four men over the gainline or pounded Leinster men backwards. Kleyn and Botha showed well throughout, but the dominant lock on show was James Ryan, the dominant number eight was Jack Conan. The dominant foreigner was Scott Fardy, wading into the battle when Dev Toner went down.

If Munster are to implement the Sarries’ approach they need a new ball carrier who can make that crucial yard or two Ryan and Conan always seem to cover.

It would be madness to continue down this road with their current personnel. They are not in the market for any new forwards, so fresh ideas are needed to put Joey Carbery on the front foot.

Slow to medium ball for one-off runners coming around the corner is bringing them nowhere in a hurry.

Add Marcell Coetzee to the Munster backrow and the possibilities widen significantly. But Coetzee didn’t come cheap. Ulster had to pay and, still, South Africa may come looking for him.

The summer recruitment of two specialist coaches – attack and the pack – is vital for Johann van Graan’s time in charge to be deemed a success.

Munster have backed him until 2022. Munster are not getting another foreign player with IRFU assistance. They need to find their own Lancaster-type coach to assist van Graan.

This is hardly news to anyone inside the Munster Branch offices. We get the feeling they did not plan for the loss of Felix Jones and Jerry Flannery. I suspect we’ll see Felix and Fla’ reappear on their coaching journey in the near future.

Next season does not need to come with a World Cup hangover. Leinster are always going to be stretched, but Munster won’t lose all their best players because some of them will miss out on Joe Schmidt’s 31-man panel.

Or not. Maybe their entire frontrow, and  Tadhg Beirne, Chris Farrell and Andrew Conway, will make the plane.

Improving without Carbery at 10 is always going to be challenging, but pre-season with a new voice – be it Stephen Larkham or whoever – can be flipped into a positive.

Doug Howlett is also returning to New Zealand after six years running Munster’s commercial and marketing department. So, whether all these changes were planned or not, they are happening.

They need to build a new playing style. Or add layers onto the work Van Graan has already achieved alongside Jones and Flannery.

The vision must have total clarity.

Senior Leinster players talk about Lancaster challenging them, about forcing them to improve.

The Glasgow Warriors model is also interesting. Dave Rennie won Super Rugby titles with the Chiefs playing a scintillating brand of rugby that fits Glasgow strengths – namely, getting ball to Stuart Hogg in full flight. But, still, when it came to Saracens, they crashed into a wall of inevitability.

Why? No direct ball carriers doing damage. There’s a brutality Rennie talks about that is essential to winning trophies.

We are about to find out if Glasgow have added that to their arsenal.

On top of Saracens and Munster, has enough damage been done to Leinster? Can Glasgow finish them off?

One more game, Leinster will be highly motivated.

Leo Cullen recovered from the 2015/16 season because he trusted his squad.

Yes, Lancaster made an enormous difference. But so does James Ryan and Dan Leavy. James Lowe and Fardy. Ringrose and Henshaw.

Munster, also, do not possess an Isa Nacewa-type figure. What they do possess they must put their faith in right now. Be that Craig Casey or the other Grand Slam under-20s, they need to turn to what they produce themselves.

You reap what you sow but it’s unfair to be comparing Munster and Leinster in 2019. Structurally, and in resources and talent depth, the other provinces are incomparable to what’s happening in UCD.

Munster’s two European titles were built upon their clubs. That’s where their players came from: Shannon. Con. Garryowen. Young Munster.

That amateur model has long since passed as a route into the Munster team, whereas Leinster always plucked their talent from the schools.

They still do. It’s a sustainable model for professionalism.

The new attack coach is an appointment that will resonate for years to come.

Semi-finals tell a team all they need to know about themselves.

Supporters and people at executive level can take consolation from losing semi-finals – it might hit the basic markers they set out to achieve – but players and coaches know full well what defeat at this stage means.

So, now, do Ulster. Dan McFarland needs an outhalf. Bill Johnston has the pedigree at underage. He could be the solution. Ulster will give him the opportunity. They also need something extra in midfield.

Now Jack McGrath moves to Belfast they are growing into a serious pack.

What we do know is the marquee foreigner is no longer an option to help the Irish provinces. Clever recruitment will find a Fardy or a Coetzee, but the number of these signing will decrease.

The Irish model is based on the spread of resources. Bill Johnston and Jack McGrath are good examples of Ulster reaping the benefits more than Connacht and Munster.

Moving swiftly along, I find it weird that Cullen is getting hassle for benching Johnny Sexton. You can talk about utilising a full squad or you can actually do it. Sexton took enormous punishment at the hands of George Kruis in Newcastle. He did exceptionally well to tog against Munster.

Ross Byrne paid back the trust placed in him – it was a risk to bench your best player in a semi-final but, as Byrne walked off the field with Leinster in total control, it goes down as a tactical masterclass.

What a weird season it has been. Feels like we are all waiting for something else to happen

This is not the same Leinster squad that won the double. No Jordi Murphy, Leavy never got going, Toner has suffered two more injuries than in every other season and Joe Tomane has had a false start to his time in Dublin. Tomane cannot be expected to replace Nacewa, who remains the most obvious shortfall since last year; the man who can fill so many gaps – centre, wing, 10, place-kicking – at any given moment. I doubt another Kiwi will be able to do that for any northern hemisphere club.

Glasgow has a real chance to leave Leinster trophy-less.

A stellar Johnny Sexton performance can turn that theory to dust. But something special will be needed at Celtic Park.

What a weird season it has been. Feels like we are all waiting for something else to happen. We are no longer number two in the world. We are not talking about embracing the favourites tag anymore. Our cough has been softened by England, by Warren Gatland, by the big Saracens men.

No harm. We remain forever Irish.

Next week I’ll provide a seasonal review before disappearing into a summer that won’t last very long.