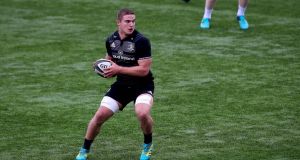 Scott Penny has been promoted to the Leinster senior squad. Photograph: Ryan Byrne/Inpho

Leinster boss Leo Cullen has confirmed the contracts of 21 players for the 2019-20 season.

With the central contracts of Cian Healy, Robbie Henshaw and Johnny Sexton already announced, a futher 18 players have signed new deals with the province.

There have been seven players promoted from the Leinster academy into the first team squad - among them 19-year-old Scott Penny.

On the announcement of the new deals, Cullen said: “It is a credit to the work that goes on in the schools and in the clubs that we are in a position to confirm 21 new contracts, with all but three coming through the system here.

“Over the last ten months or so we have been able to hand debuts to nine Academy players and they have deserved those opportunities. And now seven players that started this season in the Academy will start next season as senior players.

“I am delighted for them and indeed their families and congratulate them on their promotion. We have been very happy with what we have seen from them all in the Guinness Pro14 and in some cases in the Heineken Champions Cup and we hope that they get many more chances in a Leinster jersey in the coming years.”

Cullen also welcomed back Cian Kelleher, who rejoins Leinster after spending three years with Connacht. He said: “It is also exciting to welcome Cian back to Leinster Rugby. We have always kept a close eye on his progress at Connacht and it’s great that we can now welcome him back to Leinster and we wish him well in what is already a very competitive position in the team.”