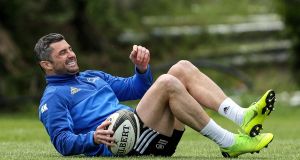 Rob Kearney remains the only Leinster player out of contract next season. The most-decorated Irish rugby player – two Grand Slams, four European titles and a test Lion – remains in negotiations with the IRFU for a national deal.

The Irish Times understands that Kearney will not drop down to a Leinster contract. If talks break down with IRFU performance director David Nucifora, the 33-year-old fullback could join a club in France, England or even Japan.

Nucifora has re-signed Cian Healy for two more years, but Seán O’Brien opted to leave Leinster when the national extension he was offered fell some way short of the money (close to €600,000 a season) London Irish are willing to pay.

“There has been some difficult times over the last few years for me personally with injury, but the support within the Leinster and the Irish rugby family was very humbling from fellow players, coaches and supporters, and it’s something that I won’t forget,” said Healy. “It made this decision all the easier knowing that I was part of something bigger than just a rugby team.”

As it stands, six more players follow O’Brien out the door. Tom Daly’s loan deal to Connacht has been firmed up, with Cian Kelleher coming home from Galway. Nick McCarthy joins Munster, Jack McGrath moves to Belfast, Leicester have signed Noel Reid, while it is unclear what Ian Nagle and Mick Kearney will do next.

All seven players represented Leinster this season and can expect further exposure during the World Cup.

In total Leinster handed over 21 contracts for next season,including the astute business of keeping Australian international Scott Fardy in Dublin.