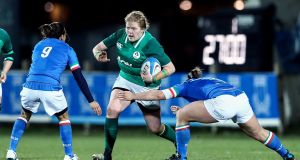 Leading figures in global rugby – from Bernard Laporte to Raelene Castle – lunched at the Irish Georgian Society’s home on South William Street in Dublin yesterday in a celebration billed as part of a “global campaign to revolutionise women’s rugby”.

A revolution from within, seemingly. The bold print spoke of 15 “unstoppable” women leading a campaign of awareness. The fine print followed with little actual information on what all this means.

“Definitely this campaign is something that is going to make a change,” said Leah Lyons, the Harlequins and Ireland prop, who is one of these “Unstoppables”. “Every kid is on social media. It is so important that girls come witness us at matches or on TV or in the media. If they see us they can think: ‘Oh maybe I can do that.’”

Each story in the campaign is presented to inspire. There is a website that screams the Brad Pitt speech from Fight Club. “First rule: Try. Second rule: Try again.”

In short, the message from World Rugby to women is: “Life will hurt you sometimes. This game will give you strength.”

The 28 per cent increase in registered female participation in the game since 2017 was noted. The addition, two years ago, of 17 females – where there was previously none – to the World Rugby Council, including Ireland’s Su Carty, was repeated.

After the light-hearted speeches – overwhelmingly delivered by male dignitaries – media attention turned to World Rugby chief executive Brett Gosper to supply substance from an event conveniently happening on the eve of the Nations Championship discussions with Omar Hassanein’s players’ representative body and other stakeholders.

“The Nations Championship is pretty central in discussions,” said Gosper of the real reason all these rugby chiefs are in town. “There are still some gaps between consensus. We are going to try and close them over the next few days or move on one way or the other.”

Sounds ominous. The Sydney Morning Herald is reporting that major opposition to including Fiji and Japan in the new 12-nation annual competition comes from the IRFU and Scotland.

Gosper stated plans exist for a female version of the Nations Championship.

“We are looking at that. The proposition we have made does set aside money for a global women’s competition; a 10- or 12-team competition would certainly be in our objectives. “The women’s game is being largely funded by the men’s game at the moment but we believe in women’s rugby as a commercial entity.”

This summer the leading nations for women’s rugby will move further away from Ireland as other second-tier nations such as New Zealand, Canada, England, France and the USA face off at the Super Series in San Diego.

At the same time Ireland coach Adam Griggs should have access to his players for camps ahead of two November internationals (opponents to be confirmed) in Donnybrook.

“We have to qualify for the World Cup, that’s our first aim,” said Lyons. “We need to get to a standard where we know what we can do. We are lucky to have a few training camps over the summer, a friendly and two November matches.”

However, the IRFU and Wales did not send representatives to Stellenbosch in South Africa this month for World Rugby’s first ever “women’s high-performance academy”, which provided “bespoke learning opportunity” surrounding high-performance coaching, match officials, strength and conditioning experts.

“There were 17 countries represented at Stellenbosch,” said Katie Sadleir, World Rugby general manager for women’s rugby. “We are looking at running a workshop for the performance directors during the Super Series in San Diego.”

Anthony Eddy, the IRFU director of women’s rugby, will be invited.