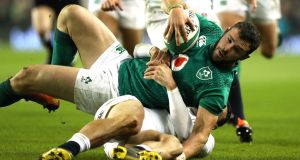 Ireland’s Robbie Henshaw is tackled by Jonny May of England during their Six Nations defeat at the Aviva Stadium on February 2nd. Photograph: Reuters

Perhaps the most acute disappointment arising from Ireland’s quarter-final defeat to Argentina in the 2015 Rugby World Cup was the fact that Joe Schmidt’s side went into the match riddled with injury, a legacy of a bruising victory over France in the final pool match.

Paul O’Connell, Johnny Sexton and Peter O’Mahony were invalided out of the tournament following the French game, man-of-the-match Sean O’Brien picked up a suspension while Tommy Bowe tore a cruciate knee ligament in the game against the Pumas as one injury followed another in a catalogue of misfortune.

Four years on and Ireland are preparing for another World Cup this time in Japan hoping not to be bedevilled by the same issues. It’s impossible to future-proof against injury but in a tournament where squads are constrained in size to 31 players, the ability to play multiple positions is a cherished attribute.

Joe Schmidt’s decision to play Robbie Henshaw at fullback against England is a practical appreciation of that truism. Defeat in that game has removed Ireland from the list of frontrunners for the Six Nations title but there is still precious little wriggle room at this juncture for experimentation in personnel terms; an exception in the past has been the game against Italy but on Sunday it might be more a case of tweaking than tinkering.

Since taking charge of his first Six Nations campaign in 2014, Schmidt has altered his matchday squad to a much greater extent for the Italian matches than any other fixture, partially predicated on injuries but also on doling out game time to the extended squad.

In 2014, Ireland played Italy in round four of the Six Nations coming off a 13-10 defeat to England at Twickenham. Schmidt made three changes for the Italian game with Iain Henderson promoted to the starting team, while Eoin Reddan and Rhys Ruddock came on to the bench.

In 2015, Ireland faced the Azzurri on the opening weekend missing several high-profile players all of whom returned by the time they faced France.

It was a case of déjà vu in 2016 Six Nations as an Irish side lost to England in round three before making six changes to the squad for the game against Italy. In 2017, there were five alterations to the squad between the Scottish and Italian matches while last season Schmidt made eight changes to the matchday 23 after Ireland had returned home victorious from Paris.

So taking the figures without context it suggests that while Schmidt might prefer to change up the squad for Sunday’s game in Rome, there are ancillary considerations that will perhaps militate against swingeing alterations primarily concerning form, both from a team and individual perspective.

The graphic illustrates the number of players used by Ireland from the start of the season preceding the Rugby World Cups of 2015 and 2019 up until the second match in the Six Nations Championships of those years.

In 2014-2015, Ireland played five Tests, against South Africa, Georgia, Australia, Italy and France using 40 players but the core of what would have been considered the first team were employed from the start across those matches, Rob Kearney, Bowe, Robbie Henshaw, Conor Murray, Jack McGrath, O’Connell and O’Mahony with four appearances and Simon Zebo and Mike Ross in the run-on team in all five.

In this season’s six games against Italy (Chicago), Argentina, New Zealand, USA, England and Scotland the playing roster numbers 45, broadly the same taking the extra game into consideration. Connacht’s Bundee Aki and Ulster wing Jacob Stockdale are the only players to have started five of the matches while acknowledging that the injury profile has been significant.

The graphic also shows the match minutes accumulated by a sample of five players that were common to Irish squads in the period in question. Kearney and Murray are lightly raced this season due to injury while Sexton, Best and O’Mahony have more match minutes racked up.

By the end of the Six Nations, Schmidt will hope to have a firm indication of the players that will form the backbone of his squad for Japan without compromising Ireland’s competitiveness. They’re not mutually exclusive goals but tricky nonetheless to find that balance.