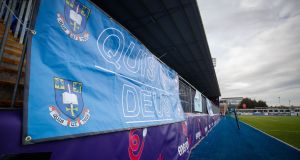 The machine gun turret freely wheeled these past few weeks strafing the rugby hinterland. Eddie Jones’s cheap shot at the Irish UN team, attack coach Mike Catt and the lack of visibly attacking Georgia, Johnny Sexton’s age, Andy Farrell’s roadmap to where he is leading the Irish team and this week that shyest of creatures the perennial David Nucifora, who only the most ardent rugby fan knows, emerged from IRFU HQ. Performance director Nucifora took some rounds too after a media briefing.

His answer to a question on schools rugby that he was too busy running the professional game to talk about it, on the face of it seemed like an opportunity missed. It surely would not have bypassed Nucifora that last month nine players on a Leinster Pro14 squad all came from the same Dublin school, St Michael’s College. That was, apparently, a record.

Maybe the attitude is that the school system is doing just fine as the youngsters, almost fully formed professionals, tumble out of the Ballsbridge academy and into paid rugby as quickly as Leinster can absorb them. As the saying goes, if it ain’t broke, don’t fix it.

The Dublin schools have become virtual academies. Not only are the players well educated, but the rugby coaching and facilities are professional level. Kudos to the school, their system and the coaching staff.

But it would have been interesting to know if the Ireland performance director believed that to be a good thing for Irish rugby. Is it desirable that one Dublin school should have such an influence on the professional game? Is that not too narrow a base? Is it not too homogeneous in ethos, thinking, innovation and diversity?

When Celtic became the first British team to win the European Cup in 1967 manager Jock Stein did it after inheriting a side that was full of local lads, with whom he had worked in the youth side and – before his arrival – had been out of favour with the previous coach.

Fourteen 14 of the 15 players involved in that campaign came from within a 10-mile radius of Celtic Park. Only Bobby Lennox, who Stein signed from Hearts, came from further afield – Saltcoats, which was some 30 miles away.

But the Celtic story of local lads conquering Europe is looked on over 50 years later as a quaint piece of history and Celtic a metaphor for uncomplicated times. No modern club in football could conceive of winning in Europe working off such a small footprint.

A colleague likes to compare any sports team to his favourite brand of gin, Monkey 47, enlightening all who listen that the more botanicals you have in it the better the flavour. Recently, Ross Molony was asked about the nine players and said he believed it was because of the coaching in the school. He added that you would not be able to walk into a Leinster training session and pick out the players by their rugby who had been coached by the school’s director of rugby Andy Skehan.

It’s a fair point and nobody is calling them automatons or instruments of just one way of thinking about the game. But further up the food chain with Ireland does a highly concentrated base cause issues?

More recently the Harvard Review reported on a body of research that revealed another, more nuanced benefit of workplace diversity.

“Non-homogenous teams are simply smarter,” it said. “Working with people who are different from you may challenge your brain to overcome its stale ways of thinking and sharpen its performance. Creating a more diverse workplace will help to keep your team members’ biases in check and make them question their assumptions.”

There is no reason business thinking should not translate to sport. The strength of any team is how they relate to each other physically and mentally. But also their botanicals. The strike rate of St Michael’s especially and a few other schools in getting players into professional contracts reflects either the poverty of an IRFU expansion policy or a disparity of resources between schools.

Nine players is an exceptional achievement. But much like Stein’s Celtic of ’67, also at odds with stuff the Harvard Review mentioned – multiformity, variance, heterogenity. That’s why Nucifora might have expanded on his answer a little more than batting it back because he was too busy running the professional game.