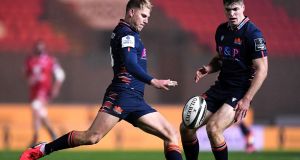 Head coach Gregor Townsend has made six changes for the Aviva Stadium clash, with captain Stuart Hogg set to win his 80th cap.

Saracens centre Duncan Taylor will make his first Scotland start since the 2019 World Cup for the third-fourth place play-off encounter.

Saracens wing Sean Maitland will win his 50th Scotland cap should he step off the bench.

Flanker Hamish Watson was missing from the matchday 23, having come off early with a potential injury in the 22-15 loss to France at Murrayfield on November 22.

“We have been impressed with Jaco over the time he has trained with us and we’re excited to see him take the next step into international Test match rugby,” said Townsend.

“It will be a tough challenge over in Ireland, given the quality of our opposition and how they will be looking to end 2020 on a positive note.

“Being able to bring back Rory Sutherland after his recent injury is a real boost, and it’s great to involve Blair (Cowan) and Huw (Jones) for the first time this season.

“If they get on the field, 39 players will have had opportunities to play over the past five games, which underlines the current player depth throughout Scottish rugby and shows the competition there is for places now in this Scotland team.”