‘They kept him overnight as a precaution. They were slightly concerned’ 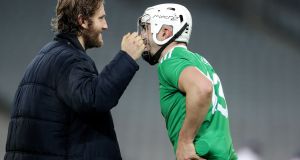 Aaron Gillane has been Limerick’s top scorer in the three games that got them to the hurling showdown against Waterford. Photograph: Inpho

Even in December it wouldn’t feel like a proper All-Ireland countdown without some anxious wait for an injured player and in Limerick’s case it’s for leading forward Aaron Gillane.

Limerick’s top scorer in the three games that got them to the hurling showdown against Waterford on Sunday week - his 2-34 including 0-27 from frees - is rated at “50-50” by current selector and former captain Donal Grady to be fit in time. Although he admitted Gillane is well used to playing through the pain barrier.

It was late in injury time in the three-point win over Galway in Croke Park when Gillane was replaced after a taking a heavy knock to his back, and was detained overnight in the Mater Hospital in Dublin on precautionary grounds.

“Aaron didn’t train on Tuesday, obviously. He took a heavy hit at the weekend,” O’Grady said of the Patrickswell club man, speaking at Limerick’s All-Ireland media briefing on Thursday evening.

“We’re hoping to possibly get him reassessed on Friday night to see how he is. At the moment, 50-50 is my understanding as of today.

“He took a heavy hit, I think he had some breathing difficulties after. Our doctor deemed (it necessary for) him to head to the Mater. They kept him overnight as a precaution. They were slightly concerned.

“But he was released the following day which was great. He came in to see us on Tuesday night but obviously didn’t train. So hopefully we’ll know more towards the weekend.”

Gillane’s consistency has played an important part in getting Limerick into their second All-Ireland final in three years, but he is also nursing an old finger injury, as well as sustaining a hamstring injury after the club season.

“He went for an operation,” says O’Grady, “it was actually not as bad as first feared. It was a ligament injury as far as I know. He possibly should have taken a couple of weeks to leave that recover, but really wanted to get his fitness and get his hurling back as quickly as possible.

“And he basically just played through the pain barrier. He is playing with that slight finger strapped or whatever, but no tougher man than himself.

“He had a hamstring injury - you can’t escape from them either - earlier on in the season. I think he just made this miraculous recovery from it, which is a great sign of him. He does take a lot of punishment inside on the edge of the square. He’s well able to mind himself though which is great.”

All-Ireland winning full back Mike Casey remains the most conspicuous absentee, having damaged his cruciate in October, but David Dempsey is coming back into contention to make the 26-day match panel.

News that the full 36-player panel can now attend the final on Sunday week was welcomed by O’Grady, although forward Tom Morrissey has now called on the GAA to look into allowing some family members to also attend, once clearance can be gained by Nphet.

“We won a league and a Munster championship and obviously we are hugely privileged,” says Morrissey, “and we know we are lucky to play the championship this year but it was a small bit disappointing that we couldn’t have our relatives close to us.

“Playing the All-Ireland final next week and after the match again, just such a big moment in our lives and not to have those people that are so important to you at the game and to share those moments in the immediate aftermath of a game.

“Not to have them there is disappointing and it would be nice if the GAA, I don’t know if they are, could look into maybe getting family there. I don’t think a big stadium like Croke Park, I don’t think there is any reason why it couldn’t be made possible. You’re looking for maybe 500 people in a 82,000 capacity stadium. I know it would mean a whole lot to the players. It would mean a huge amount.”