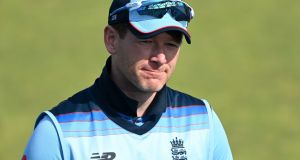 England will continue using coded signals from the balcony during the one-day series in South Africa that begins on Friday, with Eoin Morgan insisting “there is nothing untoward” about the system and it is “100 per cent in the spirit of the game”.

During the 3-0 victory in the Twenty20 leg of the tour Nathan Leamon, the England analyst, displayed messages such as “2C” and “4E” on clipboards to the team in the field, offering the captain “a live informational resource” with which to make decisions.

“[It is] 100 per cent within the spirit of the game,” said Morgan, who claimed only a couple of messages per match varied from his own thoughts in the middle. “There’s nothing untoward about it. It’s about maximising information that we’re taking in and measuring it against things: coaches’ recommendations, the data, things going on.

“I think captains are different. You get captains that enjoy the title and the power and the accolades that go with it. Then you have other captains that continue to be pushed and want to learn for the benefit of the team.”

The codebreakers of Bletchley Park were not required to deduce the meaning behind this last point. Michael Vaughan, the former England captain, has been the most high-profile critic of the system, writing in his newspaper column that a white-ball leader of Morgan’s pedigree should not require off-field assistance.

Morgan, who claims Leamon’s information could help take emotion out of on-field calls, said: “We’ll definitely continue with it and give it enough of a sample size to see if it improves our decision-making or improves our performance.”

While England went unchanged throughout the T20 series, there may be an element of rotation for the three one-day games that begin on a fresh pitch at Newlands and count towards qualification for the 2023 World Cup. Immediate changes are a given with Ben Stokes, Jofra Archer and Sam Curran sent home to rest and Chris Jordan and Dawid Malan not part of the 50-over squad.

Moeen Ali and Mark Wood must surely get their chance having been overlooked until now, while Joe Root and Chris Woakes are among the 50-over specialists who have been in South Africa all tour. Reece Topley, who offers a left-arm option, and Olly Stone, who lit up the warm-up matches with his pace, may well vie for one spot initially.

Jonny Bairstow is also restored as an opener, having responded to his new role at number four in the T20 side with a sparkling 86 in the first match. Asked if that demotion fired up the Yorkshireman, Morgan replied: “To say he only performs when he’s angry is undervaluing Jonny or not giving credit where it’s due. He’s one of our best players.”