Maradona’s death brings a sadness to sport but no bewilderment, no surprise 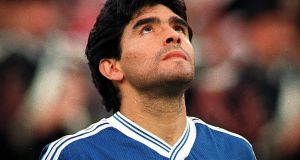 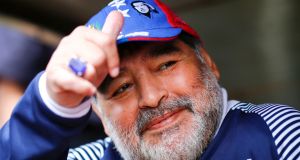 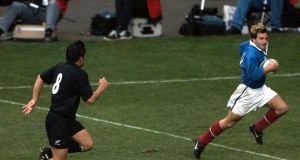 French winger Christophe Dominici runs to score a try against New Zealand during a World Cup semi-final match in 1999 – the match is considered one of the greatest games played. Photograph: Odd Andersen/AFP via Getty Images

In recent days I asked Leinster coaches Leo Cullen and Stuart Lancaster if their team’s Pro 14 average of 40 points a game in their current winning spree was such a good thing. There was a sub text to the question as to whether fans would lose interest or want to watch continued drubbings.

Some get their kick from watching an event go down to the wire. Two treble 20s and a bull’s-eye finish. Nine runs off the last over in Lord’s. A 12-foot putt to swing the Masters into playoff holes. Munster in their 40th recycle and O’Gara aligning for a drop goal in the dying seconds.

Some see it as a kind of beauty pageant. Roger Federer’s backhand. Rory McIlroy’s swing. Maradona’s balance. Usain Bolt’s grace or Michael Jordan hanging in the air, holding the pose.

Others see it as an unfolding drama with human consequences. Maradona’s biography, an unending tabloid headline. George Best’s unreliability and combustion. Mike Tyson’s ferocity that carried outside of the ring. Paul Gascoigne’s brittleness and vulnerability. Paul McGrath’s fragility, his honesty. Alex Higgins’ often light touch with the real world.

Sometimes the motive is cruelty. You watch just because you want to see somebody you don’t like get licked. Novak Djokovic, Patrick Reed, Floyd Mayweather, Lance Armstrong, Barry Bonds, Eddie Jones, Lleyton Hewitt, Peter Shilton, Chris Eubank, Joey Barton. Names that pop up on every list.

We want a black-caped Tyson in the ring snarling in his opponent’s face, the starting bell too long to wait before tearing another body to shreds, barely controlled and terrifying. We hope Bolt will rip another half second off that 100m track. We identify the qualities that appeal to us and that revolt us.

But this week we saw the cost of living and performing in that confined but magnified world at the top and it is another reason we watch sport. We look at the personalities involved and see the character weaknesses. The fault lines are always visible from early on, the way they look, the gestures, their behaviour. We watch them as they start to break in front of our eyes.

In Paris we don’t yet know what happened to rugby’s former French winger, Christophe Dominici, a jinking, brilliant player who also died this week at 48 years old. We do know he suffered from depression because in his autobiography he speaks about the time he was put into an induced coma for nervous exhaustion. We do know a witness saw him climb on the roof of a disused building at Saint-Cloud, before falling. We tragically know his body was found in a park.

But Maradona, at 60 years old, did something similar. He constantly put himself in a place of danger knowing the hazards and understanding the consequences. The cocaine, the booze, the obesity.

George Best did so too in a magisterial way, acquiring a second liver to pound out his addiction into extra time and then until the end. Alex Higgins lived a slow burn kind of public, self destruction. They all climbed up on their roofs and they did not survive, bringing an inevitable sadness to sport but no bewilderment, no surprise.

Ronnie O’Sullivan has also spoken about his depression, Gascoigne too, Tyson as well. It’s no surprise those are the names that so many people are compelled to watch. Because that’s sport too, watching them, even as in Gascoigne’s case when they are washed up and still struggling on the spectrum fringe.

People understand that’s part of the transaction. Consequentially, they are always forgiven for each bad decision, every uncomfortable moment, each time they break the law, embarrass themselves, get found out, cheat, dope, threaten, fall out a window drunk, test positive for cocaine, get imprisoned for drunk driving, or, bite off a piece of an opponent’s ear in the ring.

They are always forgiven because people, who have had to drag their own crosses through the day, understand how close they are themselves to the destructive impulse or the weak moment, the only difference a spectral Maradona gliding through a field of lunging bodies, magically attached to a ball.

Some people simply belong on the unapproved roads. Not everyone can follow Jack Nicklaus into that beige, country club twilight. Grandfatherly homespun wisdoms come from a different mindset. Maradona could not have been who he was in a Temperance Society nor Best or Higgins in a Sunday school prayer meeting.

For our own reasons they were the ones we watched and glorified. Usually, but not always for their gifts of football and snooker. Godly, their flaws made them just like us.