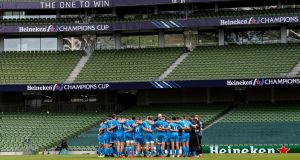 The Leinster team form a huddle after their loss to Saracens. Photograph: Billy Stickland/Inpho

This week I had a chat with Chicken Little.

She told me that after last weekend, the sky is falling in onto Irish rugby and another 800 years of rugby dominance by the Empire from across the water was coming.

During our chat, she was wearing a tinfoil cap, because she believes it gives her protection from 5G technology which, she said causes your offspring to grow an extra thumb. She went on to remind me that the “Contrails” from aeroplanes are not made of frozen water vapour but really are an “Illuminati” created substance, sprayed out to render us all zombie-like Aston Villa supporters, by 2027.

She refused to wear a facemask to our meeting, as it was impingement of her human, or in this case “chicken” rights. As she was departing she reached across the table and gave me a peck on both cheeks and whispered, “Covid is a media beat up. No social distancing for me.”

She then placed her MAGA hat over the tin foil skull cap and sashayed off onto the boulevard, apologising for her rushed departure but she was late for an anti-vaccination protest.

As we say in Australia, Chicken Little and her flock have “a Roo loose in the top paddock.”

To be blunt, she is a nutter.

Like the panic buying of toilet paper at the outbreak of the pandemic, there is no logical reason for the many prophets of doom that have sprung up talking down the future of Irish rugby after a single, close defeat of Leinster by Saracens.

Let me put it to you in a very simple explanation. The European Champions and the best team in Europe, Saracens, played the second best team in Europe, Leinster. In a close match, Saracens won. The rugby gods deemed that the teams would meet in a quarter-final, so one of the top two teams in the competition had to depart.

Saracens nurtured the months of humiliation produced by their relegation from the English top flight, into an internal ball of angry energy. With a laser like focus, Saracens targeted last week’s quarter-final as an opportunity to ambush Leinster.

Leinster in comparison had a stellar season. They smashed Northampton and the Top 14 leaders, Lyon, before winning the Pro 14. In the last month, while Saracens solely targeted the quarter-final, Leinster were fighting on two fronts.

After an astonishing undefeated 25 games, Leinster proved they were human and made many uncharacteristic, unforced errors. Added to this was a series of highly questionable scrum penalties, where the Saracens loosehead, Mako Vunipola was angling across the scrum which was causing both packs to spin and sheer.

When referee Pascal Gauzére penalised Leinster at scrum time, I believe he got most of those decisions wrong. The points and the position Saracens gained from those scrum penalties was the major difference between two very evenly matched teams.

It is a blight on rugby that such high profile matches can be determined by goals kicked from questionable scrum penalties.

I am not buying the ‘Leinster were bashed up like Ireland at Twickenham’ theory. When two heavyweight champions go toe to toe in a winner-takes-all contest, you don’t get handbags at 10 paces.

Leinster gave Saracens an exceptionally hard physical contest. Their second half performance was brave, abrasive and like the battle of Waterloo, it was a close run thing.

A single 25-17 defeat does not mean the sky is falling in.

The other piece of rugby fake news doing the rounds is that Irish provincial teams have not won in Europe, so the Irish national team has no hope of beating England or winning the Six Nations.

In the court of rugby realism, I present as Exhibit A, Welsh rugby.

Cardiff, the Ospreys, the Scarlets and the Dragons are mere shadows of their former greatness, yet the Welsh national team won the Grand Slam in 2019 and went on to make the semi-finals of last year’s World Cup.

The reason is stating the bleeding obvious.

For example, in May 2019 Leinster won the Pro12 and made the final of the Heineken Cup. A few months later at the Rugby World Cup the Irish national team were shambolic.

While that is not a perfect season, it remains an excellent outcome for Irish club rugby.

Ireland’s situation is the exact opposite of the Welsh. The Irish clubs have been highly successful in recent years but that has not translated into international success.

The reason does not lie in a conspiracy theory. Since winning the Grand Slam at Twickenham in 2018 Ireland’s tactics in both attack and defence have been picked apart by opposition coaches, led by England under Eddie Jones.

One thing is certain, playing the same tactics as Ireland did at the Rugby World Cup and the Six Nations matches of earlier this year will result in continued failure.

Ireland’s success hinges on Andy Farrell producing an invigorated game plan that puts doubt into opposition minds and maximises the considerable talent of the current pool of Irish players.

1 Seán O’Brien: Anger over my parents’ break-up never left me
2 Madness or defiance? The GAA is taking a huge gamble in staging Championships
3 All in the Game: Klopp’s Amsterdam subs don’t go down well
4 Will Connors chops his way to the front of Ireland’s openside queue
5 Plenty of positives for Farrell as Ireland hit the ground running
Real news has value SUBSCRIBE