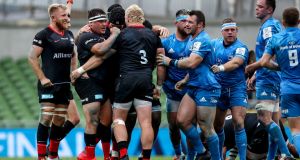 Hindsight is an exact science with a superiority complex. A forensic examination of Leinster’s 25-17 defeat to Saracens in the Heineken Champions Cup last weekend will alight on a number of issues from the largely exemplary execution of a well thought out gameplan by the visitors to several shortcomings in performance terms, some interlinked, of the Irish province.

It’s not black and white, there are nuances, but the home side’s undoing can be traced to a number of glitches that arose on the day. Leinster’s head coach Leo Cullen used the word, ‘spooked,’ in trying to explain why his team’s traditional self confidence, application and accuracy weren’t at the requisite levels. The first jolt was manifest in failing to secure the kick-off.

From the ensuing scrum, the Leinster pack could easily have been penalised as they went to ground under pressure but referee Pascal Gauzere encouraged Saracens to use the ball. It would serve as a fleeting reprieve, as the English club won seven of eight penalties at scrum time, a dominance that was central to the outcome and not just in terms of points accrued.

Ascertaining who is doing what to whom in the scrum can be difficult to discern if there isn’t an obvious transgression, so this column sought the advice of a respected former frontrow player with a coaching pedigree. The first point made was that Leinster and Ireland scrum in a similar fashion that can be traced back to Greg Feek’s time at the province and then the national side.

In layman’s terms Cian Healy takes a little step to the left and out, no more than six inches on/after the hit and this is mimicked by the rest of the pack. It can be very effective and destabilise an opposition scrum but the flip side when confronted by a team who are very adept and strong in this area, it can leave Leinster vulnerable.

Three of the Saracens tight five forwards in Mako Vunipola, Jamie George and Maro Itoje are England international teammates and also played there for the Lions with strong collective unit skills, Tim Swinson is a Scottish Test lock, while arguably a key figure, Vincent Koch is a World Cup winning, Springbok tighthead prop.

Koch took and dominated the gap between Healy and Sean Cronin - the hooker has to be a very strong scrumagger to counter this - allowing George and Mako Vunipola, supplemented by the power coming from the secondrow, to physically isolate and pressurise Leinster’s tighthead prop Andrew Porter.

Apart from one scrum late-on when replacement loosehead Richard Barrington appeared to drive in at an angle - Leinster’s Ed Byrne was instead penalised for ‘walking around the outside’ and thereby deemed to be illegally wheeling the scrum - to the practised eye Saracens drove straight and true.

Players talk about painting good pictures for referees and as far as Gauzere was concerned, Leinster’s were abstract for 80-minutes, irrespective of the personnel. The graphic illustrates when and what for the scrum penalties were awarded but it doesn’t quite tell a complete story.

Saracens fullback Elliot Daly racked up six points from the first two scrum offences while outhalf Andy Goode landed a penalty from the last with two minutes remaining that removed any lingering doubt about the outcome, making the contest a two-score game.

The visitors harvested nine points and missed two further place-kicking opportunities from the lucrative stream but crucially on a couple more occasions were able to escape when under pressure deep inside their 22, having been provided with a cheap exit.

The scrum discomfort certainly can’t be confined to the two or four props - Tadgh Furlong was missed - and the brace of hookers. There were a couple of occasions when the flankers were guilty of meerkat impressions, on the lookout for Billy Vunipola.

Leinster’s handling improved after the break (fewer mistakes, less scrums) as did the effectiveness at the breakdown allowing them to play their way back into the contest before end-game errors scuppered that comeback.

The Leinster coaching group will analyse where Leinster came unstuck, particularly upfront and how much was self-inflicted either through technical deficiencies or personal shortcomings on the day. Every year they look at the playing group and the depth chart and while three Pro14 titles in succession including a brilliant unbeaten season is a fine achievement, Europe is the high watermark.

The internal talent production line is rightly lauded but it shouldn’t preclude the recruitment of one or two players. That’s a tough ask in the current financial climate but one suspects that to reach that European pinnacle once again, Leinster, as they have done so successfully in the past, need to look a little further afield.