Head-to-head: Jack Conan and Billy Vunipola know how to lead from the back 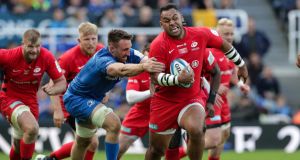 Why’s he so important? He gives Leinster power and speed off the base of the scrum and more often than not he manages to get out into the outhalf channel attracting multiple tacklers and providing his team with front foot ball and a positive gainline. A core asset is his excellent footwork when carrying into contact. His athleticism also allows him to feature in the wider channels where his lines of running in support and timing onto the ball make him a real handful.

He possesses decent hands and his presence is integral to the team’s attacking patterns reflected in his try-scoring rate. He’s focused on his work rate, particularly in defence in terms of improvement and that is reflected in the effectiveness and numbers in terms of tackles. An occasionally underrated contributor, he offers a point of difference, something he’ll be keen to reinforce on Saturday.

Trivia: Gaelic football was his first if not only love as a child. He also managed to squeeze in swimming, tennis and football before rugby took primacy. He knows what he wants to do when his professional rugby career finishes. “When I hang up the rugby boots, I’ll probably go back and play with Kilmac [Kilmacanogue]. My older brother would have been captain of the men’s senior team and I started off there when I was about six or seven. I played all the way up until I was about 17 until the rugby came in and would have taken over a bit.”

Why he’s so important? Knowing what he is going to do and stopping him doing it provides a conundrum to which few teams find an answer. He is such a powerful ball carrier, particularly when Saracens use him from second or third phase often requiring more than one defender to bring him to earth; close in he can be unstoppable and that’s where he picks up the bulk of his tries. He also possesses the game awareness to work other players into space with a well timed pass or offload in or through the tackle.

He is also a significant presence at the breakdown and takes a bit of shifting, which isn’t always stock and trade for a number eight. Saracens do like to drop him into the backfield to run back kicks. If Leinster select Will Connors it’ll be fascinating to see how he copes in trying to chop down Vunipola to a manageable size.

Trivia: Born in Sydney to Tongan parents, he grew up in Wales and Bristol before getting a scholarship to Harrow and qualifying for England on residency grounds. His father Fe’ao, a hooker, won 32 caps for Tonga while six of Billy’s uncles and his grandfather also represented the Pacific Island nation. His brother Mako, a Lions Test player, is a Saracens and England team-mate, his younger cousin, Manu (outhalf) may wear the number 10 jersey on Saturday, while another cousin is Talupe Faletau, the Wales and Lions number eight.