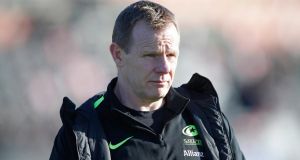 The life and times of Mark McCall will always be connected to Saracens FC. That also means the Bangor native is tainted by a level of disgrace attainable only by cheating.

One question will remain long after the 52-year-old has shuffled into obscurity: does the McCall era at Saracens count?

“There are supporters of rugby clubs who have watched coaches getting sacked and players leave and all different kinds of things, and part of that has been because of Saracens cheating,” said Baxter. “You can’t run away from it.

No, the cheats are Nigel Wray and the Saracens stars who banked additional payments, for image rights and property deals, that allowed the club squeeze into the salary cap. It makes them the worst type of cheats; fighting tooth and nail to avoid sanction while masking their true behaviour with this image of a family club, of a brotherhood who go skiing together and large it up at Oktoberfest.

United they stand (except for the 16 players forced to leave Sarries this summer in order to keep hold of Maro Itoje, Owen Farrell and the Vunipola brothers, all of whom profited from Wray’s investments that breached the £7 million cap).

You know you are on the wrong side of the truth if the Guardian’s Marina Hyde takes a day off from lacerating the Tories to pen a column on the financial shenanigans of the club you have presided over as director of rugby for the best part of a decade.

“Modern sport is about as suited to dispensing morality as Michael Jackson ever was,” zinged Hyde last January. “A useful rule of thumb in the sport money trench is: the bigger the fairytale, the bigger the fakery it’s trying to hide.”

Mark McCall – captaining then coaching Ulster before taking Saracens to the peak of European rugby – built his reputation as a honest broker.

“Ultimately, it will do Saracens the power of good to bid farewell to the moral high ground, even though they never really knew it in the first place,” Hyde added. “Realism is far preferable to moralism.”

Perhaps salvation can come for McCall and Saracens by revealing the unvarnished truth about the financial doping that made them unbeatable for so long.

“I think Nigel Wray is a great man,” McCall told BT Sport in an excruciatingly cautious interview last November. “He’s given a lot to rugby and a lot to this club and a lot to this community over a very, very long period of time. I would very much hope [he does not walk away].”

Wray retired as Saracens chairman in January but his family will continue “to provide the required financial support to the club”.

McCall, who won 13 caps for Ireland between 1992 and 1998, was asked if relegation and the £5.3 million fine for breaching salary regulations would “tarnish any of your achievements, particularly your European titles?”

“I think in lots of people’s eyes it will,” McCall responded before attempting to turn the page. “The big challenge is to see how we respond to this. Can those relationships we have worked so hard on for 10 years be as strong in two years time? That will be a real test for us.”

That’s also how long it will take them to qualify for the Champions Cup. Unless, of course, they beat Leinster on Saturday night and go on to retain the title.

Another question will follow McCall into the future: how much did he know about the illicit financial activity (exposed by journalist Laura Lambert)?

Whatever the answer McCall cannot be painted in a favourable light; either he knew about the biggest scandal in 25 years of professional rugby was happening on his watch or he didn’t, which makes him an exceptionally naive figure head.

Leinster survived Harlequins’ Bloodgate skulduggery in 2009 but Leo Cullen’s charges were unable to halt Billy Vunipola of Vunprop Ltd or Farrell from Faz Investments in the 2019 Champions Cup final at St James’ Park.

At least Saracens versus Leinster (part three) on Saturday will be more believable than what came before.

“If Joe Schmidt was the best coach I would play under,” wrote Rory Best in his book, “Mark was probably the next best.”

Best goes on to outline McCall’s “downfall” as Ulster coach. Turns out Justin Harrison – the Wallaby lock – had “poured himself into the bottle” after the break-up of his marriage.

“Justin was struggling [he showed up at Belfast airport for a flight to Galway drunk from the night before], but Mark lacked the experience to handle him,” Best revealed, “he knew how important Justin was to the squad, but when he turned a blind eye to some of his excesses it was not lost on the other players.”

This, Best states, is what led to “other players taking advantage of McCall.” That was 2007. A few months later he was driven out of Ravenhill by a player revolt.

“He was pretty much near broken and he was going to stop working in rugby,” remembered Jeremy Davidson in 2016, after the Castres coach’s lifeline got McCall back on the horse for their two seasons working together in France before his former London Irish team-mate, the Springbok Brendan Venter, tempted him into joining the ‘Saffracens’ revolution.

“I don’t think Mark gets the credit in Ireland for what he has achieved in England, ” Best added. “I am not sure he gets it over there either.”

These achievements, by hook or by crook, will forever exist in infamy.

Liverpool maintain perfect start with win over Arsenal 22:12
Hourihane gives Kenny a nudge as Aston Villa sweep past Fulham 20:05
Rafael Nadal up and running as he bids for 13th French Open title 20:23
Positive omens for Kenny ahead of Ireland’s Slovakia clash 22:09
Fixture pile-up means Spurs could sacrifice League Cup 18:07
Crossword Get access to over 6,000 interactive crosswords