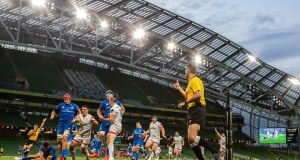 The mental acclimatisation to senior professional rugby is often the bigger challenge for the talented young player for whom the physical aspect can seem easier, initially trading on youthful endeavour. Cut some slack to try things as part of the developmental curve there comes a cut-off point when that no longer suffices.

James Hume, touted as an excellent prospect from his school days, discovered that graduating to Ulster’s first team was a process that came with lumps and bumps on the pathway. Injury was an initial stumbling block but there was also a requirement for a change in attitude. That adjustment was provided by Ulster coach Dan McFarland.

Speaking ahead of Ulster’s Heineken Champions Cup quarter-final against Toulouse on Sunday, the 22-year-old centre spoke about McFarland’s role in smoothing a rough edge here and there.

“I’ve had some tough chats with him over the past year or two, like when I first came into the seniors, [my] attitude was a wee bit off and again mental strength was just a wee bit off.

“It was a kind of ‘knuckle down’ type thing; he told me what I do well and just stick to it. It has obviously started to pay dividends over the past [while].

“Dan is great. He comes off with a lot of quotes and a lot of book references, a lot of documentary references so I feel like that’s why he’s so knowledgeable. That’s why he’s strong in the role he plays because he just knows what to say at the right time.”

The lockdown period afforded Hume some time to refine his approach, which he embraced wholeheartedly. “I found a lot of time to read and do a lot of mental strength stuff because I don’t feel prior to lockdown that I was a mentally tough person to be honest. I felt that was something I could definitely work on, so I read a couple of books and watched a load of documentaries and stuff.

“It just kind of drove me on when I came back from lockdown, when there are dark times, when you’re doing fitness or in a tough part of a session, it’s definitely going to make you better.”

In the absence of the injured Luke Marshall, Hume has formed a productive partnership with Stuart McCloskey in the Ulster midfield and has found his voice on the pitch.

“Despite the age gap, we get on really well,” reveals Hume. “He’s an unbelievable player so I’m learning stuff off him every training session, every game and I see how much of an influence he has in games.

“Obviously the public sees a lot of carries and tackles, but he does so much more than that. He’s obviously extremely experienced in big games, so he’ll always say ‘same as last week, keep doing what you’re doing, and I’ll be there to clean up any mess’. We feed off each other really well and I’m enjoying that.”

Hume demonstrated his attacking credentials – he was name-checked by Brian O’Driscoll for his performance – with a superbly taken try in last week’s Pro 14 final defeat to Leinster, the origins of which could be found in some extracurricular analysis.

“It wasn’t really in our gameplan, but I looked before the game at a couple of video reviews and I saw that picture a couple of times.

“I just thought at the start of the game I might try it and it came off. I don’t actually remember a lot [between] getting the ball and putting it down. It’s a blur. So whatever happened, it was natural instinct to be honest.

“It was obviously great to put my name out there like that, especially after some injuries, so hopefully I can get a really good run of games.”

Beginning on Sunday with his first start in a European tie. There aren’t many more searching examinations for a young 13 than trying to keep your head against a freewheeling Toulouse side.

He’s grateful for the knowledge that defence coach and former Irish international Jared Payne has imparted, an elegant player who knew a thing or two about excelling in the 13 jersey. He’s more comfortable with the responsibility that accompanies the role.

His preference though for Sunday would be to feature far more prominently in attack because that would mean the team is going well and it would allow him to bring more of that creative edge. Whatever transpires he admitted: “It’ll probably be another surreal experience.” Hopefully a tale punctuated with a happy conclusion.

All in the Game: Klopp’s Amsterdam subs don’t go down well 10:00
The Offload: Outgoing Tom Grace will be missed by IRFU 10:00
Madness or defiance? The GAA is taking a huge gamble in staging Championships 06:00
Limerick’s warning loud and clear despite the eerie silence in Thurles 06:00
Will Connors chops his way to the front of Ireland’s openside queue 06:00
Crossword Get access to over 6,000 interactive crosswords