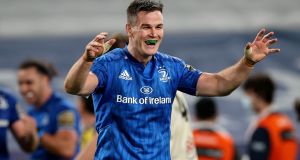 Johnny Sexton will captain Leinster in Saturday’s Champions Cup quarter-final clash with Saracens, which will be played behind closed doors at the Aviva Stadium.

Sexton started last weekend’s Pro14 final win over Ulster on the bench, but along with halfback partner Luke McGrath he is reinstated to the starting XV.

Jordan Larmour earns his 50th provincial cap from 15, with James Lowe and Hugo Keenan on the wings. Robbie Henshaw and Garry Ringrose form an elite midfield.

Seán Cronin gets the nod ahead of Ronan Kelleher at hooker and joins Cian Healy and Andrew Porter in the frontrow, with Devin Toner and James Ryan in the engine room.

Will Connors will make his European debut in the backrow, where he is joined by Caelan Doris and Jack Conan.

Meanwhile visitors Saracens have opted to start Alex Goode at outhalf in the absence of Owen Farrell. This means Elliot Daly will start at fullback with Duncan Taylor slotting into midfield.

Mako Vunipola is also fit to start, while Richard Wigglesworth gets the nod at scrumhalf.