Cullen says Sexton can make impact off the bench for Leinster 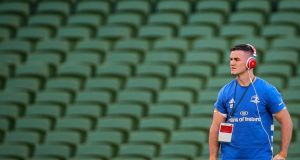 Leinster’s Johnny Sexton will be on thge bench for the Pro14 final against Ulster. Photo: James Crombie/Inpho

In making four changes from the starting XV in the semi-final win over Munster for Saturday’s Guinness Pro14 final against Ulster at the Aviva Stadium (kick-off 7.35pm), Leo Cullen’s most eye-catching selection is undoubtedly the decision to rotate at half-back, thus leaving his captain Johnny Sexton on the bench.

Amid the myriad factors at work, and the impending European quarter-final in a week’s time against Saracens as well as Ireland’s six-match autumnal schedule, Cullen explained that the management’s thinking was in mixing a degree of freshness with continuity.

It’s also a reward for Ross Byrne, who has started in 11 of his 16 appearances in the 2019-20 campaign, whereas Sexton’s sole two appearances in this competition – out of just five starts for Leinster in this elongated season – were the two meetings with Munster since the resumption.

Asked about Sexton’s reaction to being told he was on the bench, Cullen said: “We’ve been through this before with you guys and the players. It’s not a straightforward selection for these games. You go to the end of the season and, if you’re lucky enough to be competing on two fronts, it’s making sure that you have guys able to give a full (account) of themselves on a given day. Trying to balance all the different variables as well, who’s helped us get to this point.

“We’re blessed with the four half-backs we have. Johnny will give good impact from the bench whenever that may be, but you have to remember how important Ross has been to the team over the course of this very long season that we’ve had.”

Cullen also confirmed that Sexton was fully fit, adding: “In terms of 9s and 10s, you have to take a lot on in terms of the preparation of a team and the toll that takes. Between the four (half-backs), we’re very lucky. We’ve a lot of confidence in them to be able to mix and match like that.”

With Jamison Gibson-Park also promoted, the other changes sees the return of James Ryan (who has played just one Pro14 game this season) for his first appearance post-lockdown after recovering from a minor operation on his shoulder, while Josh van der Flier is restored.

Like Sexton, Luke McGrath, Scott Fardy and Will Connors are named among the bench, where James Tracy is also picked ahead of Sean Cronin, with Ryan Baird and Rhys Ruddock among the others to miss out.

“When you get to these knockout games you’re looking for a bit of freshness and a bit of continuity at the same time. That’s what we’ve gone for,” explained Cullen.

“We think we’ve a strong 23 that will hopefully represent the 53 that managed to play through the course of the year.

“Ulster, you seen them against Edinburgh, we’re planning for a strong 80-minute game from them, so we need to make sure we have that bit of punch coming off the bench as well.”

In his 75th appearance, Garry Ringrose will captain Leinster for the first time.

“If you think of Devin Toner, someone of his experience, Ross Byrne is so integral, James Ryan is a key leader, I suppose James and Garry are two younger leaders in the group.

“If you think back to the start of this season, they were preparing for a World Cup so a lot of our international players weren’t here. We had a leadership group for the start of this season - a good year and four months ago - but Garry has been excellent for us since he came back from the World Cup. He’s grown in that leadership space all the time.

“He would have captained the team late in the game against Munster, so he’s definitely one for the future in terms of leadership, but he’s got plenty of support around him,” said Cullen, who also referenced Sexton, McGrath and Fardy.

Ulster’s place in the final was secured by a couple of late kicks from the former Leinster outhalf Ian Madigan, one of six one-time Leinster players on the Ulster bench.

“We have to make sure our discipline is good late in the game, because Mads would enjoy some of those big pressure kicks, I’m sure,” admitted Cullen.

“It’s a 23-man effort, we’ve used 53 players to get to this point. Some of them have moved on to other clubs, that’s the unusual dynamic of this season. A lot of guys who are not selected have played a big part in getting us to the final. We’d love to have our friends and families and supporters at the ground, but it’s important to focus on performance at this stage.

“Over the first three weeks of the season we haven’t quite reached where we want to get to yet. So that’s very much at the forefront of our minds, how we direct a strong performance from our end. Hopefully conditions are good and we avoid the downpour we had at 7pm last Friday.”

No apparent concerns on that score. The forecast is set fair.