Liam Toland: We’re not Europe’s All Blacks in one area – transition

Joe Schmidt has announced the Irish team for Saturday's clash with the Springboks. Cian Healy starts ahead of Jack McGrath while Keith Earls is out through injury. Video: Enda O'Dowd 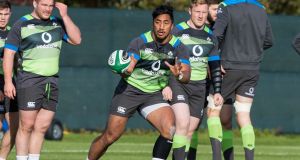 It appears World Rugby is less certain. The World Cup technical review group had 18 functional areas to rate. On the seventh functional area they placed Ireland, France and South Africa level – on security. This appears a tad bizarre considering, well, the security of the three jurisdictions.

In the meantime how does Joe Schmidt secure three autumn home wins with a cracking opener on Saturday against South Africa? How did South Africa transition from a 57-0 loss to New Zealand and within 21 days almost beat them when losing by a point 24-25?

Well, Malcom Marx is one place to start. We’re well used to powerful Springbok hookers – the likes of Bismarck du Plessis and John Smit – but Marx is off another planet. That Brodie Retallick was missing made the All Blacks vulnerable. However as much as South African coach Allister Coetzee insists Ireland are “the All Blacks of Europe” we are not the All Blacks in one key differential – transition.

This is aided hugely by the phenomenal All Black back three of Damian McKenzie, Nehe Milner-Skudder and the outrageous 20-year-old Rieko Ioane.

Ireland’s exciting team selection for Saturday at 9, 10, 12 and 13 opens up huge debate/potential around the balance required from the Irish back three, and should Joe Schmidt ultimately elect to engineer his back three into transition experts akin to the All Blacks. That, of course, brings the Simon Zebo debate back to the fore.

General Melcett is right; security is not a dirty word but it can become a place of comfort. However, we must remember it is the first test of the season, with returning Lions and newbies forming new relationships, so please be patient in the stands. In noting patience, I wonder what makes Schmidt and his teams so successful?

With the brilliance of Zebo slipping away I wonder in what way Ireland can evolve this autumn? Factoring in time constraints and international pressures I’m hoping for an appropriate level of evolution of style in preparation for the upcoming hurdles.

But in what way? Will it be the continuance of the ruthless pursuit of excellence where the individual and then the team improve by increments or will we see another side of Ireland? Will Seán O’Brien carry wider? Will CJ Stander tip-on offload?

International rugby (RWC 2015 and recent Six Nations) has the ball in play about 36 minutes of every match. In these 36 minutes the try scoring per game is improving each season; fitness and spatial awareness are part of the story but in the 2016 Six Nations, England scored only three tries from turnovers.

Alarmingly, the entire six nations combined provided a paltry 7 per cent of all tries (five in total) from turnovers.

A Joe Schmidt team will continue to excel incrementally around the key building blocks of our game; lineout, scrum, breakdown, etc, but, with the arrival of Bundee Aki into the Irish midfield, the evolution of how we transition is ripe for exploitation.

Between 20 and 30 turnovers are conceded per top-end match (15-ish per side). That’s a turnover every 72 seconds of playing time. What teams do with this is paramount.

That Ireland will force turnovers on Saturday through Peter O’Mahony’s lineout steals or Robbie Henshaw and Aki over the midfield ball on the deck or sloppy play from South Africa is a given. How many is yet to be determined, but what Ireland do with same is what I’ll be watching for. Because, with specific focus on the Springboks’ resurgence over the All Blacks, pace of play is South Africa’s enemy.

Ireland can match them all over the park, so what pace Schmidt imposes on Johnny Sexton will matter. Yet Schmidt’s team selection is set up for speed. Cian Healy at prop or Ian Henderson in the second row can carry at pace but will also fill the field in defence, pushing the back row wider to get hits on the Springbok ball carriers – and protecting Sexton.

More importantly, will the Ireland back three who have never played with Aki tune into his wavelength? Because his actions will open space and opportunities that shut very, very quickly.

Connacht players expect Aki to take it to the line and offload pre- or post-contact so they arrive to where the ball will be to maximise. And with a turnover every 72 seconds, how will Ireland utilise Aki to punish the Springboks?

This is what an All Black side in full flow achieved in that 57-0 rout, making South Africa look appalling. But they are not appalling; not back to their best that is true. With such a complete new Irish formation I fancy Sexton will control turnovers gained by selecting when to punish, whether kicking the corners or unleashing Aki et al. But unleash him he must, and when he does the back three must react.

A playing time of 36 minutes a game is one thing but to be fair playing time in international training is even more constricted. However, how much time do schools and clubs spend on cold winter evenings in training sessions around the country on the set piece before rejoining the backs in a 10-minute team play?

And, finally, how much time is spent in training to maximise those hard-fought for and precious turnovers occurring every 72 seconds?

Real Steel sees off stablemate Footpad at Thurles 15:36
14-man Saracens on the brink of last-eight after edging Racing 92 15:22
Class is permanent for Lee Westwood as he claims Abu Dhabi title 13:43
Saracens accept Premiership relegation and issue apology 11:05
Tyrone continue McKenna Cup dominance with Monaghan win 10:48
Here is your handy guide to sport on television this week