Tadhg Furlong mixes fire with ice in trenches of the frontrow 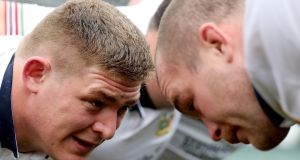 There is a clip in the upcoming Lions fly on the wall DVD of the summer tour to New Zealand where Tadhg Furlong is scrummaging against Jack McGrath.

The two erupt into a physical spat with Furlong protesting his innocence suggesting the push was from behind. Iain Henderson may have been the real culprit. What it highlights is that a work day in the frontrow, even among Irish teammates in a practice session, is a life of conflict.

“Yeah that happens every now and then. I didn’t know that made the video. Look it’s confrontation isn’t it,” says Furlong before a moment of reflection.

“It’s full bang. It’s full on and sometimes it does get a little bit heated,” he adds. “But it is left there. Know what I mean. It’s just lads fired up and physically going after each other isn’t it?”

It is a contrast to the current Vodafone campaign where Furlong the baby, Furlong the boy, Furlong the adolescent, Furlong and his first cap evolve into Furlong the senior international player. And at 24-years-old, also one of the hottest tighthead props in the world.

It is no mystery why Furlong was picked for the ad campaign (with Conor Murray, Rory Best and Tiernan O’Halloran). In keeping with prop tradition he is seen as is an authentic character, farming stock, a lot of heart.

But the Lions clip also shows fire with the ice and, looking towards a weekend against the Springboks where the frontrow will be tested, it is a chance for him to reinforce his earlier statement as a first pick Lions’ prop with Mako Vunipola and Jamie George last June.

“At 24…a tighthead prop…you are never done learning,” he says toning down the rhetoric.

But being back in the Irish squad and assuming to be a senior member, seems obvious.

“I wouldn’t say that,” he warns. “There is still a massive core of experienced players in the squad. Me, I’m still trying to learn.

“Last year was a big year for me in learning from experiences, new things, new challenges along the way. I was pretty happy with how the season went.

“I suppose the challenge this year is stay at it and keep working hard and doing your job and not getting ahead of yourself. From an experience point of view I think I have grown a lot from where I was on that tour. But I would say I still have a long way to go.”

One thing about Furlong is that he has Munster DNA in his bones. That’s not being unkind to Leinster but it is of a type. Peter O’Mahony has it. Paul O’Connell had it. Peter Clohessy probably improved the original patent of it. The trenches have never fazed Furlong.

His rapid rise has been eye catching. But to say an Irish frontrow has become an easy pick for Joe Schmidt is to get Furlong to shift uncomfortably in his chair. As he sees it, “easy pick” is backhanded criticism of other players and fails to recognise the fine margin differences.

The assumption is that the flare up with McGrath is a not an uncommon feature of Irish sessions. No wonder their training pitch at Carton House is completed screened off from prying eyes.

“Cian (Healy), Jack (McGrath) and Dave Kilcoyne I’d be coming up against as a tighthead,” he explains. “Each of them would have their own kinks and what they like to do. One is not easier to scrummage against than the other.

“I think if you look at Leinster the two lads have been going neck to neck. I think Dave (Kilcoyne) has been really impressive for Munster as well. From a tightead point of view John Ryan has been scummaging really well.

“Andrew Porter, he’s physically a very impressive athlete. He’s still young, still has a bit to learn but his progression having seen him switch from loosehead to tighthead, I’ve no doubt he is going to be a top international player. Throw all that in and it definitely doesn’t pick itself and the scrums have been pretty full on.”

“That’s the way rugby is now days. You have to match their physicality first. You try to be smart, smarter than any team you play.”

He’s the best tighthead in Europe said Tendai ‘Beast’ Mtawarira this week. For once it’s not mind games.