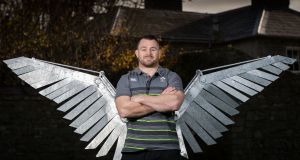 Cian Healy was a shining national treasure. The country had nothing like him so the number one was plastered on his back from November 2009 until March 2014.

It nearly destroyed him. Our jaded prop would slow jog off Lansdowne turf to a chorus of applause after each phenomenal shift.

Too many times Healy slogged for 80 minutes as the game failed to protect the men it punished most. Eventually some genius came up with the extra prop substitute but, still, the experts piled pounds on him.

They piled minutes on him too.

The body creaked but Healy’s mental fortitude held until the limbs and joints screamed for relief. “Proper Church” crumbled before our eyes, the ruins quietly swept away. Neck surgeries followed nerve damage that made arm and hand movement unnatural yet Healy’s inner voice ignored clear health scares to battle back onto the field. The man is a medical miracle.

“This summer I decided to take a bit of my weight off, lean up again, become fast again and not worry about being a bit of a bulldozer.”

“I suppose at the World Cup, I was 125kg then I dropped to 120 and I just didn’t like it up and around that so this year I dropped it right down. I was 114 coming back in after the summer. I’m kind of hovering around 115 now and pretty happy with it.”

Performances of old are returning.

“Yeah, I just got rid of the shit weight. There is no belly weight or anything like that. I’m probably the leanest I have been since, Jesus, I don’t know, 2008 or so. I’m feeling good. I don’t feel like I have any excess weight.”

Healy was a guinea pig, the first power surge to burst into Ireland’s professional system. The bulking up days have past, the All Blacks proved that value of slim mobility, but Healy has no issue with early guidance.

“They have all been pretty good over the years to let me mess around and see what works. We used to say at the start that we wanted me heavy because it was the easiest way to get the scrum going forward and stuff.

“I did that and messed around with it. They were on board with everything so when I said to the lads at the end of last year, ‘I’m going to shift a bit of weight here.’

“I rented a cross trainer for the house for the summer, stuff like.

Just morning fitness. It’s not too taxing on the body. The joints don’t take a bang or anything like that. If it’s not going to affect my muscles or joints badly, then they are all for it.”

Did injuries come with the weight? “Nah, I don’t think injuries would be based on that. It’s just a general feeling. You feel better when you’re a little big lighter.”

Any regrets about not losing weight sooner?

“No. I’m alright with it. I’d say when I was struggling after a couple of the surgeries and stuff like that, the weight would have helped me when I was less capable around the field.

“Now I’ve gotten this freshness about myself, I’ve lifted the fitness and dropped the weight. It’s a balancing act.”

Jack McGrath, a more traditional world class prop, slowly trucked past his Leinster pal. The Lions took McGrath and two English looseheads to New Zealand last summer leaving a devastated Healy, having all but healed, after straining every sinew to return close to the brutal magnificence of his epic years, before the fattening, went on tour with Ireland.

“Cian has had to build himself back into the game, because he had a long time out, he lost his rhythm,” Joe Schmidt explained as Healy starts his first truly substantial Test match since the Six Nations was captured at Stade de France in 2014. “His rhythm is good now. He led unbelievably well in Japan. It was the first time, for me, I’d seen Cian have to shoulder a leadership role. Cian really stepped up in the summer when Rory, Tadhg and Jack were not there.”

We relayed the compliment.

“In parts I did,” Healy shrugged, in his chilled, shy manner, “Some of us were asked to step in and direct the lads how to do whatever systems were, lead the way, that wouldn’t come naturally to me. I wouldn’t be much of a speaker but I tried my hand at it and enjoyed it.”

Andrew Porter profited. The 30-year-old expressed joy in New Jersey at the sight of Porter’s switch to tighthead to balance the spread of rhino-hides in Ireland camp. Porter needs minding, specific training to ensure Tadhg Furlong has healthy rivalry, like we are seeing with McGrath, Healy and now Dave Kilcoyne.

The Springboks are coming. To bludgeon Ireland. They will look for Healy.

“Go for it. We’re fairly well set. We’ve trained hard and we’ve went at each other, so physically anyone can bring anything to us and I don’t think we’ll have too much of a problem.”