Coach will be “a big loss to the Springboks but a massive gain for Munster,” says Coetzee 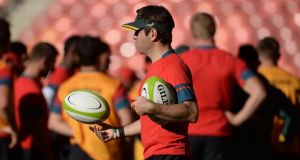 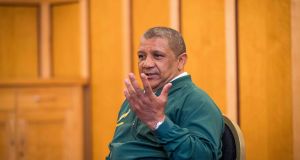 Allister Coetzee has indicated that Rassie Erasmus won’t link up with the Springboks this week. Photograph: Morgan Treacy/Inpho

Munster and the Springboks have confirmed that Johann van Graan will be released from his duties with the tourists after their games against Ireland and France over the next two Saturdays before taking up his new assignment with the province.

This will afford van Graan a two-week build up too his opening game as Munster’s head coach when they travel to Italy to face Zebre on Sunday November 26th. The choice of van Graan, revealed in The Irish Times, means he will end his six-year association with the Springboks after originally being brought on board by Heyneke Meyer in 2012. He was the only member of their 2015 World Cup coaching ticket to be retained under Allister Coetzee when he then succeeded Meyer.

Having cut his teeth with the Bulls under Meyer, during which time they won the Super Rugby title in 2007, ’09 and ’10, Van Graan’s working title has remained forwards’ coach, although he also has a significant input into the Boks’ attacking game.

“He has been massive and besides his tactical info and coaching ability he is a good person as a human being,” Coetzee said. “He has been doing a good job for the Springboks over the last few years and it will be a big loss to the Springboks but a massive gain for Munster. He has been working well in our coaching structures, yeah.”

Van Graan has been seeking to take on a head coach role for some time, and Coetzee admitted his assistant is unproven in this regarded, but added: “Assistant is a starting point to being a coach and once you have been a good one that makes it easier to become a good head coach as well. You cannot not do your job as an assistant coach and expect someone else must assist you, then you get the head coach’s job and he has been an outstanding assistant coach. His knowledge of the game is second to none. He is a hard worker and that’s what you need from an assistant coach and tactically very astute.”

The Sprinboks arrived in Dublin yesterday yet curiously, Coetzee intimated that South Africa’s incoming director of rugby, Rassie Erasmus, would not be linking up with them during this week’s preparations for Saturday’s test against Ireland at the Aviva Stadium.

The two men have yet to meet, and Coetzee suggested they wouldn’t be doing so on this tour.

“Probably next year. At this point in time the focus of the management team and coaching staff is on the Tests. The other stuff will be looked at next year definitely.”

As regards next Saturday’s first of four tour games, Coetzee confirmed that captain Eben Etzebeth had fully recovered from an ankle injury picked up in training, as has backrower Uzair Casseim (rib).

“Both are eligible for selection and there are no injury concerns,” said Coetzee. “Eben has done team training on Saturday, obviously limited but he’ll part of the squad doing full training today. There are no concerns whatsoever about his inclusion and in leading the team. Usair came through as well, all contact. He is 100 per cent to go and so really from a wellness point of view we’re in good shape.”

Coetzee also admitted he had a decision to make at out-half between the regular first-choice Elton Jantjies and Handre Pollard, who started in the Boks’ defeat to Ireland on their last visit here in 2014. Jantjies has been playing with his Japanese club, Shining Arcs, for the last three weeks, whereas Pollard has been training with the Boks during that time.