Liam Toland: In appreciation of the pioneer Neville Furlong

He will be missed by many – his family, Garryowen, and his old army rugby team-mates 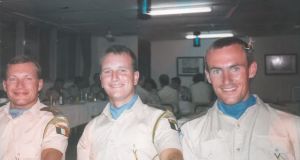 Who was the last player to score a four-point try at international level? And what did he say to John Kirwan after touching down? As I cycled along the Wild Atlantic Way this September with Cross Cancer Research, deep in conversation with Zinzan Brooke, my mind drifted to New Zealand and Neville Furlong. Even Brooke hadn’t heard the immortal words echoed in Wellington on June 6th, 1992, with a final score 59-6. In recent times the world has lost two great Irish number eights and two cracking number 11s. Jonah Lomu is simply the global legend of our game. But the other number 11, Neville Furlong, is the purest of pure legends; an ideal hero.

Yes, he was part RoboCop, but without the “roids”, as B-Company personnel in Hadath, Lebanon, will testify. Neville’s first of two trips to Lebanon was in 1993 with the 73rd Infantry Battalion where he fashioned a weightlifting bench press by stealing a metal bar and filling two buckets with concrete, combining his two loves – sunbathing and weightlifting – on the roof of B-Coy HQ.

Ireland’s first professional rugby player? In 1995 he was back with the 77th Infantry Battalion – but this time as Col Freddie Swords’s “love child”. His trips overlapped with the Israeli Operation Grapes of Wrath where the Irish witnessed countless atrocities, but it all started in 1993 with the Israeli Operation Accountability – which was somewhat prophetic, as accountability became Neville’s trademark.

For Neville was very special in the relentless simplicity he brought to all his success. Be it in the Castletroy Park Retirement Village where Antoinette, Pamela and his team battled the recession to ensure the future of so many vulnerable older adults by staying true to their wonderful vision. Or his various other ventures, culminating in the Kinlay Hostel on Eyre Square. He also had less successful investments such as the Rolex watch he purchased at the foot of the Acropolis of Athens, trading his digital watch and the last of his drachma.

For many, Neville’s caps, heavily bandaged broken ankle and try against John Kirwan, one of the greatest wingers of all time, define him, but for me it’s his time in the 3rd’s dressing room in his beloved Garryowen with team-mates Mikey “the Bake” Carmody, Dave “Gaggsy” Geoghan, Andy “Burger” Nevin, Johnny “Beds” Lane and team captain Brian “Dobbo” Dobson that tell the true story; they would do anything for the relentless Neville – even travel to New Brunswick RFC; anyone would. Because his greatest trait was spotting the weak guy where others would glance on by.

But Neville’s story is equally buried deep in the bowels of Fontainebleau, 55km south of Paris where the great Irish-French Army rugby battles took place. With conscription, the French army team was an unofficial French U-23. The Irish army travel arrangements were legendary: due to cut backs, we would often arrive in Fontainebleau in worse shape than the Allies after landing in Normandy and battling all the way to Paris. As a cadet in the 68th Cadet Class I teamed up with Neville with the Irish Students and then the Defence Forces. The army didn’t have the same array of stars as the students so Neville would start the French game on his customary left wing but would soon be shifted in to 13, then to 12 and oft times to 10; that’s when they had the ball. And one by one the French flair would be cut in two by one of the purest tacklers I’ve ever seen. The Quartier Pigalle was a reward but it was the teacup ride in Disneyland Paris which is my fondest memory, where Neville begged big Bob McCarthy (fresh off the round-the-world yacht race) and monster Tony Casey to stop spinning.

On the verge of Irish caps Neville single-mindedly battled against pedigree. A Connacht-Leinster game in Donnybrook comes to mind. My old colleague Niall Woods was on fire on his Leinster wing until Eric Elwood invented the box kick and Neville did to Woods what many wingers discovered: the hoarding.

As our Cross Cancer cycle continued along west Clare to Galway I noticed the 58th Cadet Class en masse deep in the peloton. Riding tallest was Rusty – Comdt John O’Callaghan (retired). We were due to visit Neville in the Galway Clinic but he’d transferred back home to Castleconnell. After 18 months Neville had beaten the tumour growing in his right leg and, true to character, he built a gym at home and bought a bike for his rehab. For me, grace under pressure was the hallmark of Neville with the arrival of the terrible news that he wasn’t going to tackle this cancer. The very bike supporting Rusty was Neville’s rehab bike. On arriving to Galway we got a picture of Zinzan, Rusty and the bike.

Neville was my Mr Wolfe. In October 2004 I was given two options; go on the junior command and staff course or go to Kosovo. It says something about the Curragh Camp that I chose Kosovo, but October to April meant an entire season out of rugby; I was captain of Lansdowne FC and of the Defence Forces. As life in Kosovo rolled into the heavy winter months I was summoned into Lt Col Andy Kilfeather’s office. Neville somehow convinced the top brass that I should be granted two weeks’ special leave from Kosovo in the interest of Army rugby to play against the French. He got things done; in fact, in 49 years he got thousands of things done.

Above Neville’s computer at home hang four pictures: one of him facing the All Blacks in 1992; a photo of him, your correspondent, Ross O’Donnell, David Lavin and Neil Taylor (who is shorn of a jersey) after yet another massive defeat to the French in Paris, on the eve of Brian O’Driscoll’s hat trick. But the one taken in the Khayelitsha township of Cape Town is the most special: a band of brothers, we were all united, on tour and living life to the full; or, in his words, “It was beautiful as long as it lasted, the journey of my life.”

Many, many families will feel the deep loss of Neville, his family in Wexford, Wexford Wanderers rugby club, the 63rd Cadet Class, the 12th Inf Bn, UCG, Connacht, Ireland, but the ones that will feel his loss the most are us old Army rugby boys, Garryowen and, without doubt his beautiful wife Trish and sons Ódran and Kyle.

As Neville exited from the church on his final furlong on Thursday, his 12th Battalion rugby team-mate Sgt Ian Ryan – “Ryaner” – led the 12th Bn pallbearers with the music of Luka Bloom ringing out.

You were right, Neville: when you scored that four-point try against the All Blacks in 1992, on a broken ankle, Kirwan “couldn’t tackle a cripple”, as you said, but you’ve left a huge Band of Brothers behind that can tackle anything.