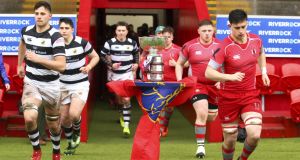 The opening 40 minutes of the Ireland v France Women’s World Cup match in UCD is a good place. That it was the best 40 minutes of any French rugby team (male or female) I’d seen in 10 years is testament to the environment in French women’s rugby; offloads, change of angles, off-the-cuff stuff and power plays.

The French kicked the ball only once in the opening 40 minutes? But that’s not where I will start although I loved every minute of the WRWC 2017.

What of the Sean O’Brien miracle try for the Lions against the All Blacks? Can this be replicated? Where did it come from and has the Scarlets’ coach Wayne Pivac a distant hand in Lions’ fullback Liam Williams countering out from his 22? I think so. But again, that’s not where I’ll start!

No, I chose to start the season with ‘meaningful rugby’.

What is meaningful rugby? This, I’m happy to admit, will be a recurring theme throughout the season; not for the professional game but for the schools and youth game where a challenge has arisen.

Schools wish to ring-fence players in a panelled system as the following motion was passed in August at the Munster Schools Rugby agm; ‘If a player in a Non-Exempt’ School (formerly ‘A’ school) wishes to play ‘Youths’ rugby after Junior Cup age-grade (i.e. U17) he may be released but cannot play in the Munster Schools Cup thereafter’.

On foot of this, Limerick players were given, depending on their school, a variety of instructions; from nothing at all to ‘you can no longer play for the club and that if you do you won’t be allowed to play for the school ever again’. Which is an U17-U19 three-season shut-out.

The politics of school versus club interests me little especially as the above has been countered this week by the Munster Youth Committee; ‘parents can choose whether his/her child plays Schools or Youths rugby or both, subject to the Rules and Regulations of the Munster Branch of the IRFU’.

However what does exercise my entire being is the concept of ‘meaningful rugby’; and when I say meaningful, it should be as the French women play it but more importantly it should be simply playing. In other words, how many matches per season constitutes meaningful?

I took a look at a club in Limerick and two Limerick A schools’ data. Typically there’s two tranches of panelling; September and December where 28 Limerick players are ring-fenced for about 19 schools games per season; in Cork the school panel is a massive 44.

The IRFU guideline is between 16 and 25 matches per season which is as much to do with player welfare as it is meaningful rugby. This is understandable as these are kids after all. But is that 16 starts; 16 full matches, 16 half matches or 16 token involvements off the bench.

Of the Junior Cup cycle in Limerick last season there were but 5 players from 17 in one club who managed the 16 games (of some hue) over the school’s season (70 per cent fall short). That increases to 8 of 17 when you factor in club open cup of three matches combined with schools. Why only three club games?

Because the club was unable to field teams outside of the open cup due to the high number of panelled players. Of the senior cycle only one of the six players panelled got meaningful rugby which required club and school. Why is this important?

Firstly, the club have given some service starting kids as early as five in the culture of our game and want them to continue playing. Secondly, if you are on the fringes of the school panel you’ll get almost no meaningful rugby.

In getting to the Munster Schools Junior or Senior Cup final, schools are playing about 19 games (friendlies and competition) but have large squads. Worryingly there’s little data to support these numbers and interestingly the same schools don’t impose similar rules on their GAA players.

Welfare should always be an issue but the GAA have freedom to just play; be it club or school. I wonder is this tackle bag syndrome and constant ‘professional’ training without meaningful matches an influence on the stark drop-off of rugby players approaching the U-20 age group?

There are several methodologies in play across the country but taking Cork (44 panel) which has bizarrely but two city A-schools; PBC and CBC with Bandon Grammar in the county. Cork’s population is well over twice that of Limerick but has half the number of A-schools (Limerick has Ardscoil Rís, Castletroy, Crescent, St Munchin’s and Glenstal) so North Munster is unique when also factoring in a sixth school, Tipperary’s Rockwell.

In other words, Limerick doesn’t have the playing population to service both club and school while paradoxically many kids are still not playing. Of course certain schools are generous in releasing players while other schools are not. This negatively impacts coaches and supporters alike.

So what is to be done?

Greater co-operation between club and school; reduce the panel size down from 28/44 and review it every fortnight to ensure those missing out get games – somewhere.

Finally, has the hunt for schools trophies become so important that those five-year-olds who’ve started playing for the love of rugby become marginalised out of the game because being number 28 or 44 in the squad is important to the school but not important enough to get a game?