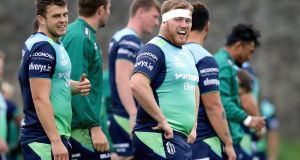 Connacht players during training ahead of their clash with Scarlets. Photograph: Laszlo Geczo/Inpho

Moving upwards from their mid-table position in Conference A probably won’t happen this week for Connacht. Even coach Kieran Keane’s guarded view on what stage of effectiveness he sees his team at now seems a little off from where he would want it to be.

“Decision-making has really been a focal point for us. We have hard workers, we have good players, and we have structures they are coming to grips with that will create opportunities, which we haven’t been able to exploit yet,” said Keane this week.

“So, putting a little bit of polish on the rough diamond is what we are looking to achieve.”

That may have been prompted by the late collapse to Cardiff Blues last week, which is the team’s third defeat under their new coach. But there is also a touch of frustration with Keane, who lives to the mantra that in sport you generally get what you deserve.

But he is now more anxious for Connacht to make a statement sooner rather than later.

Last season’s winners Scarlets have won three of their four opening games in Conference B. With that Wayne Pivac’s side have placed themselves among the league’s aristocrats and the players have a real understanding of consistently high performances reflected by their 28-8 win over Edinburgh last week. A Connacht win would not just make a statement but turn a few heads.

The Welsh side can play expansively and apart from the international experience of their Wales and Lions players, fullback Leigh Halfpenny, centre Jonathan Davies or captain and hooker Ken Owens, the side is also well drilled.

“This group of players want to win every week and so it’s a different mentality and focus,” said Pivac. “It’s come with time.”

Tiernan O’Halloran makes a return after injury to Connacht with hooker Tom McCartney captaining the side. Tom Farrell forms the centre pairing with Bundee Aki, while Caolin Blade gets his second start of the season as he forms a half-back partnership with Jack Carty.

In April of this year Connacht lost 8-30 when the sides met in Galway. More clinical in offence, Scarlets are on almost three times the try scoring rate of Connacht with 19 tries so far this season to Connacht’s haul of seven. Connacht clearly need to put away more chances.

“We haven’t been able to lament anything,” added Keane. “We aren’t feeling sorry for ourselves or anything like that. We are just moving on.

“We have reassessed a few things and aired a lot of small issues that probably held us back a little bit, and we have got on with the job.”