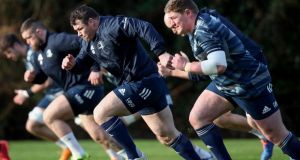 Leinster go into their 1pm kick-off in Pool One in pole position, qualified for the last eight and atop the seedings as things stand. Photograph: James Crombie/Inpho

The final round of pool games in the Heineken Champions Cup is invariably a defining weekend for the Irish provinces in their season, although in all four cases their European campaigns appear virtually determined already.

Leinster go into their 1pm kick-off in Pool One in pole position, qualified for the last eight and atop the seedings as things stand. Yet despite a haul of 24 points from a possible 25, remarkably they are still not yet sure of a home quarter-final.

However, a win of any hue will not only secure that prize but also the equally coveted carrot of a home semi-final should they progress that far.

Ulster lie second in Pool Three but know that a 19th home win in a row of any kind against Harlequins (kick-off 3.15pm) on Saturday will at least assure them of a place in the knock-out stages.

Munster need a sequence of results to go in their favour for a Houdini-like escape into the knock-out stages, beginning with either Northampton achieving no more than two match points away to Lyon, or Glasgow failing to earn a bonus point win away to Sale.

If Northampton win in Lyon (kick-off 1pm) and Glasgow obtain a bonus point win in Sale (kick-off 5.30pm), then Munster are out.

But if either of those results go Munster’s way, then they will still be alive come their 1pm kick-off on Sunday against the Ospreys in Thomond Park. Munster would then need a bonus point win and hope that both Saracens pick up no more than a losing bonus point at home to Racing and, following these games, likewise Gloucester in Toulouse. Racing have Donnacha Ryan back and are more or less at full strength, but then so too are Saracens for what looks like the game of the weekend.

In that unlikely scenario, even for the competition’s undoubted drama kings, a bonus-point Munster win by 21 points or more would leave Gloucester needing three match points.

With all eyes on that prize of a top seeding, Leinster have selected a strong side, with just four changes in personnel, and all them up front.

Seán Cronin and Andrew Porter come into the front-row and likewise James Ryan has recovered from his calf strain to resume his second-row partnership with Devin Toner. Caelan Doris starts at number eight, with Max Deegan shifting to the blindside.

Ulster have been boosted by the availability of Will Addison, who left the Stade Michelin on crutches last week

The net effects sees James Tracy, Tadhg Furlong and Rhys Ruddock (rounding off a less-than-brilliant week for him) drop to the back-row, while Scott Fardy is rested. In his stead, Luke McGrath captains the side in an unchanged backline.

Benetton demand respect. They should have won both home games, having led Northampton 25-8 before losing 35-32 to a penalty deep into overtime by Dan Biggar. Tricky opposition for Leinster in recent years, they make 10 changes from the team which led in Northampton entering the final 10 minutes last week, with Tito Tebaldi and the former Leinster, Connacht and Munster out-half Ian Keatley recalled at half-back.

Ulster have been boosted by the availability of full-back Will Addison, who left the Stade Michelin on crutches after last week’s defeat by Clermont but has recovered from his calf injury. Against that, last week’s other casualty, Marty Moore (ankle), has been ruled out.

Thus, in Dan McFarland’s only change, Tom O’Toole has been promoted in place of Moore, with Ross Kane on the bench. O’Toole was picked ahead of Moore by Andy Farrell in Ireland’s Six Nations squad, and so all eight of the Ulster players in that 35 start on Saturday, with Billy Burns again up against his brother Freddie at out-half. Aside from them, those who were left put – notably Jordi Murphy and Stuart McCloskey – will not lack for motivation.

Bath make eight changes to the side that lost 25-19 at home to Harlequins last week. Lock Charlie Ewels captains the side on his return from a two-month injury lay-off, as do England World Cup players Ruaridh McConnochie and Sam Underhill, but Jonathan Joseph and Anthony Watson are rested.

As things stand, going into the weekend the only dead rubber is Montpellier against Connacht

Munster make just two enforced changes to their line-up, with Calvin Nash making his European debut in place of Keith Earls, who has a minor knee niggle, while Fineen Wycherley replaces Jean Kleyn, who has a neck injury, in his first Euro start.

Academy duo Jack O’Sullivan and Ben Healy are named on the bench and are set to follow Craig Casey and Shane Daly last week in making their Euro debuts off the bench. Daly, who sustained a thumb injury this week, and Chris Cloete lose out on a place among the replacements.

As things stand, going into the weekend the only dead rubber is Montpellier against Connacht but, despite that, Andy Friend has named a fairly strong side for their trek to the Alstrad Stadium.

With Kieran Marmion returning for his first game since suffering a back injury against the Ospreys in November, Bundee Aki, Jack Carty, Colby Fainga’a and captain Jarrad Butler are among those retained. Following his call-up to the Irish Six Nations squad, hooker Dave Heffernan returns to the front-row.