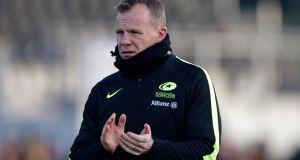 Saracens director of rugby Mark McCall is identifying players to be trimmed from the squad. Photograph: Henry Browne/Getty

England’s erstwhile champion club Saracens will be playing in the Championship next season after repeatedly failing to adhere to the Premiership’s salary cap.

The club’s players were informed on Friday that the club’s management had decided to accept a further 35-point deduction after coming under renewed pressure to demonstrate they are currently operating under the salary cap.

Premiership Rugby have yet to confirm the situation officially but the Guardian has learned that Saracens players were told of the unprecedented development at a breakfast time meeting. Having already been fined £5.6 million (€6.5 million) and deducted 35 points, a similar punishment would see them drop to -42 points with 14 games to play, effectively down and out in terms of Premiership survival.

The club’s acting chief executive, Ed Griffiths, had initially indicated he would aim to cut wages and offload players but it has become increasingly apparent that doing so this season will not be practicable. Other English clubs cannot accommodate them without going over the cap themselves while any severance payments would also count towards the cap. It is understood Saracens would have needed to trim up to £2 million (€2.35 million) from their wage bill to be compliant.

The Premiership and European champions were originally sanctioned after being found to have broken the league’s £7 million (€8.2 million) salary cap for the previous three seasons, during which time they won the league twice. Originally it had been indicated that Saracens would be given until the end of the season to demonstrate they were not exceeding the cap for 2019-20 but the mere idea the club could escape relegation this season while still breaking the salary cap has infuriated several of their rivals.

An impending descent to the Championship presents those players still at the club with a massive dilemma: currently England pick only players from the Premiership and international rugby is essential for those wanting to put themselves in the shop window for selection for the 2021 British and Irish Lions tour. The RFU, however, insisted on Friday that Eddie Jones can select players from Championship teams.

It is a shattering comedown for a group of players who have been the dominant force in English and European club rugby in recent times. Patience, however, has run out among those who have long believed – and now know for certain – Saracens were not abiding by the salary cap regulations.

The prevailing view among the Premiership’s chairmen is that their continuing failure to do so now leaves little option but punish them afresh. “We have been talking to them and working out what they were going to do for a long time now,” said a club source. “The reality has become apparent that it is difficult for them to become compliant for this season. They are definitely looking down the barrel. Time has to run out for them eventually.”

Griffiths confirmed this week, however, that “the Wray family have always been committed to Saracens and remain so.” The club’s next game is this Sunday when they host Racing 92 in the final round of this season’s Heineken Champions Cup pool stage for which they have selected a full-strength squad including all their internationals.

Mark McCall’s side can end Munster’s hopes of progressing to the quarter-finals if they beat the French side at home. Munster are at home against Ospreys in their final Pool Four game. – Guardian