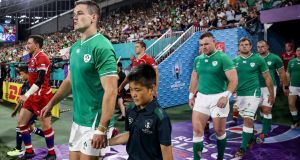 Johnny Sexton could be named as the new Ireland captain, having led the side against Russia during the Rugby World Cup. Photograph: Dan Sheridan/Inpho

At around 4pm on Wednesday afternoon there will be a significant landmark in the new era for Irish rugby with the announcement of the first squad under Andy Farrell’s watch for the opening games of the forthcoming Six Nations.

Numbering around the mid to high 30s, it will also be drawn largely, and possibly entirely, from the 45-man squad named for the ‘mid-season stocktake’ last month for a two-day get-together. Johnny Sexton is likely to be named as captain.

The eight uncapped players in that squad were never going to be retained en bloc for the opening exchanges in the Six Nations but around half that number could be included. This in turn is likely to reflect Leinster’s imperious form and conveyor belt of aspiring young Test players, with Ronan Kelleher, Caelan Doris, Max Deegan and, possibly, Will Connors, all strongly in consideration to be named.

Kelleher, who turns 22 next week, would have been a shoo-in on the strength of his early-season form, scoring seven tries in his 10 starts. He has been sidelined since Leinster’s third pool game away to Northampton at the start of January, and word is he’s unlikely to return this weekend against Benetton but he should be fit for the pre-tournament week-long camp in Portugal from next Wednesday onwards.

Hence, while his chances of making a starting debut against Scotland in the opening game in Dublin on February 1st have been reduced, Kelleher is liable to be one of three hookers named, along with Niall Scannell and Rob Herring. That said, Connacht’s Dave Heffernan has been having his best season to date.

Farrell and his re-jigged coaching ticket of Simon Easterby, Mike Catt, John Fogarty and Richie Murphy have been in conclave on and off over the last couple of days, and there were a number of other injury concerns which have delayed finalising the squad until Wednesday.

One of those is Marty Moore, who hobbled out of Ulster’s defeat in Clermont with an ankle injury, but he is expected to be fit for Ulster’s final pool game at home to Bath on Saturday and therefore should make the cut.

Jack McGrath, John Ryan and Finlay Bealham were all injured when that December squad was named and as a third loosehead who, like team-mate Moore, has shown good form for Ulster lately, McGrath might force his way in.

Save for the unlucky Tadhg Beirne, there’s a familiar look to the locks as well, with Ultan Dillane pushing hard for inclusion. One of those players who picked up an injury at the weekend and is another source of concern is John Kleyn, who has a neck issue.

In the continuing absence of Jack Conan, Deegan and Doris have alternated at number eight and played starring roles in Leinster’s unbeaten start to the season. Deegan, man-of-the-match last Saturday against Lyon, has augmented his dynamic carrying with an improved workrate this season, perhaps due in part to the emergence of the exceptional Doris, whose own development in his second season has been striking. He looks ready already.

The in-form Josh van der Flier, who looks nailed on for the Irish seven jersey, and Rhys Ruddock will swell Leinster’s presence further, presumably along with CJ Stander and Peter O’Mahony.

If there is to be a seventh backrower then, as was the case in December, the tackling machine that is Connors is probably still ahead of Jordi Murphy and Jack O’Donoghue in the pecking order.

Conor Murray’s stronger performances of late, especially in Munster’s losing cause against Racing last Sunday, and the continuing good form of Luke McGrath and man of the moment John Cooney leaves the scrumhalf slots looking like a fairly open and shut case.

Joey Carbery’s latest mishap potentially leaves a position open at outhalf along with Sexton and Ross Byrne. Named in that ‘mid-season stocktake’, Billy Burns may well remain ahead of Jack Carty, who’s since played little rugby, and JJ Hanrahan.

Midfield is interesting, not least as Stuart McCloskey’s improved passing and decision making, along with his carrying and offloading, makes him hard to ignore, even if he will regret not giving a try-scoring pass in the opening moments against Clermont. This could be as a fifth centre along with the World Cup quartet or, conceivably, ahead of Chris Farrell.

All bar Rob Kearney of the quintet of back three players at the World Cup are expected to be named, along with his brother Dave. Back fit, durable and playing regularly, the uber dependable younger Kearney has, if anything, grown stronger since being included in that December camp.

Will Addison will also be named again presuming his latest injury, suffered against Clermont last Saturday when returning from a four-week suspension, has not set him back once more. The Ulster fullback has had fewer missed tackles this season and his work under the high ball, footwork, appreciation of space and distribution mark him out as a quality player. He also offers versatility.

With the new Irish head coach due to attend the Six Nations launch in London next Wednesday along with his captain, presumably a new man will be named to succeed the retired Rory Best.

The encouraging weekly updates on Sexton’s knee injury gives the lie to some speculation concerning his likely absence for the opening exchanges of the Six Nations. His place in the team is less under threat due to Carbery’s damaged wrist ligaments, which in turn reduces the need to give the latter more game time.

Sexton, who captained Ireland for the first and thus far only time against Russia in the World Cup, is ready for it and, almost certainly, wants it. O’Mahony, whose form has not been exceptional, is under greater pressure for his place in the more competitive backrow area and there’s no need to rush James Ryan’s ascension to the throne just yet.